Everything, or at least almost everything, is decided. Geraint Thomas is the winner of Tour de France 2018. Tom Dumoulin is second and Chris Froome third. It seems that everyone, also his hardest competitors, think that Geraint Thomas really deserves this win, but they would of course have preferred to win themselves. BBC Wales celebrated with yellow jersey on the Welsh Dragon. (I first overlooked that they had changed name from BBC Wales to BBC Wheels.) The competition for the Green Point Jersey, the polka dot King of the Mountains Jersey and the White Jersey for the best young rider, was decided several stages ago.  Peter Sagan, Julian Alaphilippe and Pierre Roger Latour only have to finish today’s stage.

Today’s stage is, as the final stage has been the last years, short and flat. It is “olny” 116 km. If you think this is really short, get your bike and go for a 116 km ride. It will be some photographing and cheering before they enter the final part in Paris, where the race begins. I hope the riders will let Sylvain Chavanel get a chance to go in a TV-breakaway in Paris, on the final stage in his 18th and last Tour de France. I do not have the statistics, but I do not think any other rider has been in as many breakaways in Tour de France as Sylvain Chavanel.

The stage will probably end with as sprint, as it usually does, among the sprinters who have made it to Paris. As a Norwegian, I hope for Alexander Kristoff of Edvald Boasson Hagen. But to be honest, I think Peter Sagan will be back in business, and take this one too. 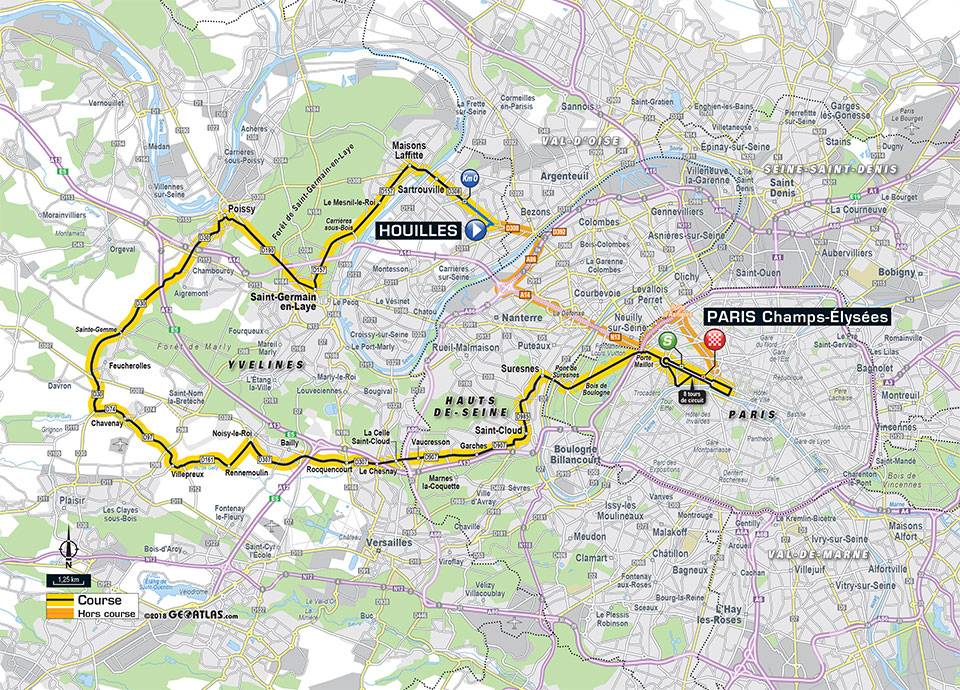 The stage takes us through the quarter Saint Germain en-Laye, where the composer Claude Debussy was born August 22,1862. Claude Debussy showed his musical talent early, and was accepted as a student at Paris Conservatory of Music when he was 10 years old. Conservative professors were critical to his more and more unorthodox compositions. But despite that, he won the most prestigious prize for young composers, Prix de Rome, when he was 22, for the cantata  L’enfant prodigue. This prize meant a scholarship to go to Rome to study.

Claude Debussy was one of the most important composers at the beginning of the 20th century. He moved away from the traditional tonality. His harmonies were not functional, in the sense that they were not driving the music. They were more “sound colouring”. It has been said that none other composer has been plagiarised as much as Claude Debussy. All composers of film music are indebted to him. His music is often called impressionistic, a term he refused.

Claude Debussy was skeptical to Richard Wagner, who had many followers among those who wanted to be modern. Debussy said that Wagner was “a beautiful sunset, mistaken for a dawn”. Debussy was skeptic to anything German. Not very surprising for one who grew up with the Franco-Prussian war, and experienced the siege of Paris as a kid.

Artists who are breaking or transcending the conventions in their own time, are often not well received among their contemporaries, also among contemporary artists. Another of the great composers of the 20th century, the Russian born Igor Stravinskij studied for some time with Nikolai Rimskij Korsakov. When Stravinskij mentioned Debussy, Rimskij Korsakov replied something like this: “Don’t listen to it. You may end up liking it”. Stravinskij ended up liking it.

There is some wine production in and around Paris. But it is only a small production and mainly a curiosity. To find what is the local wine of Paris, we have to go some 50 km to the east. We do not have to go any further to find the closest vineyards in Champagne. And there is no wine better to celebrate the final of Tour de France than champagne.

Most of the champagne sold are made by large champagne houses. They often buy grapes from independent growers, but some also grow their own grapes. They are brands that shall have a consistent taste, no matter when it is produced. A Moët & Chandon Brut Impèrial shall taste like a Moët & Chandon Brut Impèrial, like it did three years ago. They are often made with grapes from several growers, often from different vintages.

Some producers make champagne only from their own grapes, others supplement with grapes from others. In the recent years, there has been a trend where the growers want to produce their own champagne, rather than to sell their grapes to the big champagne houses or to cooperatives. I like this trend, but it makes it difficult to follow the development with many small producers. Many of them produce excellent champagnes, and their champagne is often less expensive than the champagne from the large champagne houses. Guy Charlemagne, is one such producers that has become very popular in Norway.

Champagne is made from three different grapes: Chardonnay, Pinot Noir and Pinot Meunier. For historic reasons, some other grapes are allowed, but they are not used, or very little used, in practice. The two main cities in Champagne are Reims and Epernay. The wine growing areas in Champagne are like this:

There are four important wine growing areas. Vallée de la Marne is closest to Paris. Here they mainly grow Pinot Meunier, which is regarded as the least noble of the champagne grapes. It is a cool micro climate along the river, and Pinot Meunier tolerate cold weather better than the other grapes. In Montagne de Reims, between Reims and Epernay, they mainly grow Pinot Noir. Côte de blanc is the best area for growing Chardonnay.  Aube and Côte de Bär, further south, was for a long time looked down upon by producers in Reims and Epernay. They would not admit that they were buying grapes from this area, but they did.

In recent years, it has been made some very interesting champagnes in Aube. Some think that the best champagne now is coming from producers in Aube. It is an area closer to Burgundy than to the champagne cities Reims and Epernay, and the culture is influenced by Burgundy. They put more emphasis on terroir, that the wine shall have a character from where the grapes have been growing, than they traditionally have been doing in Champagne.

But we are in Paris, not Champagne. We stick to the part of Champagne that is closer to Paris, meaning the areas around Reims and Eperany. 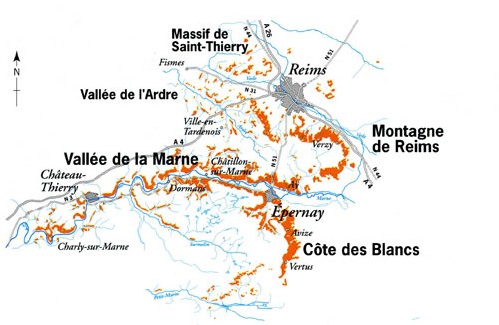 Champagne is first made as a still wine. It is stored sur lie, on the lees, and must be stored like this for a minimum of 15 monthts, but it is often stored longer. The wine get an aroma from the yeast, often described as brioche, which sounds better than yeast. Some grape must is then added, and it is a second fermentation in the bottles. The bottles are then gradually turned and tilted, so that they ends up with the heads down, with the deposits at the cork. This part is then frozen, the bottles are uncorked and this piece is shot out of the bottle, the bottles are then refilled, corked and labeled. After some further storage, they are ready for the market.

Most champagnes are blends, or cuvées made from many wines, often from different vintages. This blending is a process that requires skills and experience. The still wines are blended before the second fermentation, and they must be able to predict how it will be carbonated after this fermentation, with slightly higher alcohol, etc.

Almost all champagnes are produced as white wines. The colour is in the skin of the grapes. If the skins are removed before the fermentation, the result is a white wine. The majority of rosé champagnes are made as white champagnes, and then some red wine is added. A very few are made as proper rosé is made, where the skins remains in the must during the first part of the fermentation, and are then removed. Genereally, I prefer my champagne white. And I like the proper rosés better than the rosés with added red wine.

A champagne made from only white grapes, in practice Chardonnay, is called blanc de blancs, white of whites. This gives a fresh champagne. It has been a warm summer, and the weather forecast says that it will be a warm afternoon in Paris. A blanc de blancs would be my choice. If really should celebrate, and not care too much about the costs, my choice would be Taittinger Comtes de Champagne Blanc de Blancs. It is an expensive champagne, it is available at the Duty Free store at Oslo AIrport for around 140€. I usually do not buy such expensive wines. But I tasted it when we were visiting Taittinger in Reims last year, and it is an excellent blanc de blancs. I have been tempted some times when I have landed at Oslo Airport, but so far I have resisted this temptation. We can get good blanc de blancs that are more moderately priced.

There are many qualities of champagne. I usually go for the “standard” cuvées. Champagne is an expensive wine, and I cannot afford to buy wines at 100 to 2 000€ a bottle. At least, then I cannot drink wine as often as I do.

There are also “cheap” champagnes. Many cooperatives and other producers make champagne from low quality grapes, often sold to supermarket chains that sell them under their own brand name. The are “real” champagne. But a good cremant or another sparkling wine can then be a better choice. But for those who drink labels more the the content, it is champagne.

Tomorrow is monday, and we get a feeling of emptiness. What shall we do when Tour de France is over? I start the second part of may bikerail trip. I will go by train to where the Moselle/Mosel river starts in Vosges, then cycle along the Moselle/Mosel river to where it flows out in the Rhine river i Koblenz (I cycled along the Rhine river two years ago), and then go by train from Koblenz to Bremen, to Hamburg and to Kiel, and take the ferry from Kiel to Oslo, where the ferry docks a few hundred meters from where I am living.

Next year, there is no World Championship in football or other events that interfere with Tour de France. The start will be a normal time, July 1st. The start  2019 will be in Brussels, which also celebrates that it is 50 years since the Belgian cycling legend Eddy Merckx had the Yellow Jersey in Tour de France for the first time.

The tour starts with a 192 km stage from Brussels to Charlroi, and then back to Brussels. Stage 2 is a 28 km team time trial in Brussels, starting at Palais Royal and ending at Atomium.

Where it will continue from there, is not yet published. We can expect to see many speculations, but we will not know before the stages are presented in October. But it should be a safe bet that there will be a stage to somewhere in Northern France. This means that we will have a few days with Belgian and French beer, before we can find some wines.

I also hope that there will be a stage or two in my part of Languedoc.