As expected, a lot of action on yesterday’s stage, with an impressive final by Primoz Roglic. Yesterday I found something that I should have found before:  A time limit calculator. I hope it will be available in an updated version next year. Peter Sagan suffered, but finished within the time limit.

Today everything will be decided. Today’s stage is a 31 km long individual time trial. Usually it is only the GC-riders that have anything to fight for on these time trials, in addition to time trial specialists like Fabian Cancellara and Tony Martin, who ride for a stage win. But as far as I have registered, there are noe time trial specialists in the race, that are not competing for the GC.

The domestics have done their job. They cannot help their captains on an individual time trial, and their job is to finish with a safe margin to the time limit. Jens Voigt once called these time trials near the end of a grand tour “semi rest day”. Peter Sagan and Julian Alaphilippe must also just complete the stage, to secure the green jersey and the polka dot jersey that they have already won, as long as they make it to Paris. I am sure Peter Sagan will ride for a win on Champs Elyssées if he has recovered. But he only has to get to the finish to win the green jersey.

Sometimes a team may find that they have a chance of being the best team. The results for the three best riders on each stage from each team count in this competition. If a team has been riding well, without winning anything, this may be something to take home. And some of the domestic may be told to go out and fight in the time trial. But this year Moviestar has a safe lead in this competition. Today’s stage will not be very interesting to watch before we get to top twenty in the GC.

After this stage, it is only the parade in Paris, that will not change anything in any of the classifications. It is a fight for the prestige of winning in Paris for the sprinters who are still in the race. 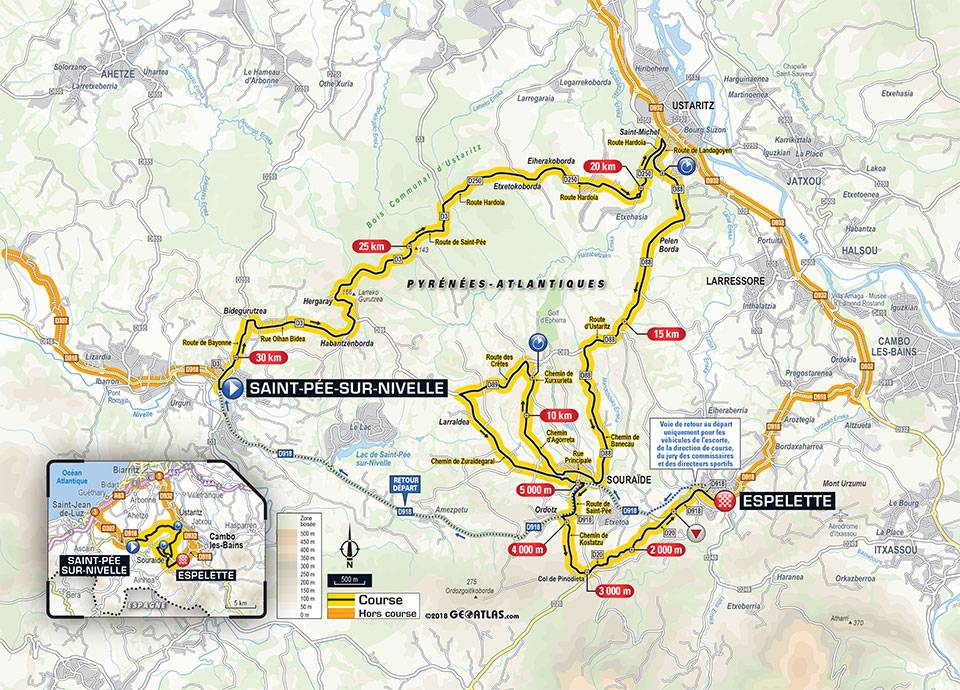 It is a hard time trial, with many climbs and descents. It should be a stage suited for riders who are good time trialers and good climbers, such as Geraint Thomas, Tom Dumoulin and Chris Froome. I do not really know how good Primoz Roglic is on these kind of stages. 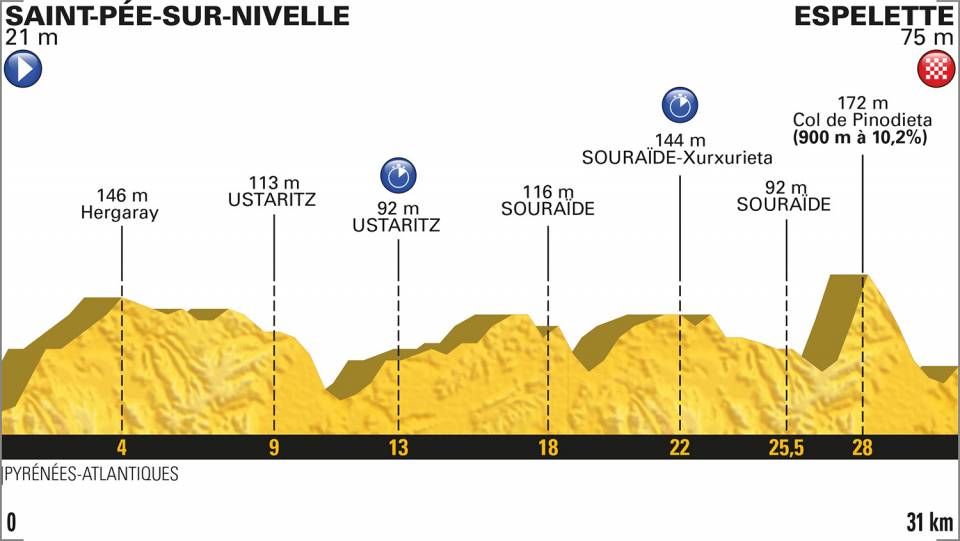 We are close to the Atlantic Ocean, in French Basque Country. The Tour has not been here in the years I have been searching for wine along the stages. Here it is a new wine territory for me: Irouléguy. It is a Basque name. It was the monks in the abbey Roncesvalles who started to produce wine here. Monasteries have been important in introducing wine to new areas.

I will return a little bit to pilgrims, but not the pilgrims who go to Lourdes. Pilgrims on their way home from Santiago de Compostella carried vines from Spain, that they introduced to many areas north of the Pyrenees.

The vineyards in Irouléguy is located in a circular depression with a diameter of ca 15 km, which opens up to the north. The area is influenced by foehn winds from Spain, and is protected from the Atlantic Ocean.  They produce mainly red wine, from the grape  tannat (Bordelesa Beltza in Basque), supplemented by Cabernet Franc (Axeria ) og Cabernet Sauvignon (Axeria Handia). They produce some rosé to satisfy the demand from tourists, and white wine from the same grapes as in Jurancon:  Petit Manseng and Gros Manseng.

One of the first names I learned for a specific ham, in addition to the generic cured ham (spekeskinke in Norwegian), was Bayonne Ham. It is named after the city Bayonne. As for many other products, i has gotten its name from the port from which it was shipped, rather than from the production area. It is produced in French Basque Country. Bayonne in France should not be confused with Bayonne, New Jersey in USA, where the comic strip character Ernie is living.