At last a success for Arnaud Demare. André Greipel has deleted his comment about suspicious climbing, and has apologised. Then it remains to be seen if his win gives him a boost on the next stage, or if he get a “mission completed” reaction, and get at bit too relaxed. It will be another fight with the time limit today.

Now it is this year’s last high mountain stages, with Pyrenees classics like Col de Tourmalet and Col d’Aubisque. For the GC-riders and the climbers, yesterday’s stage was a kind of recovery stage. Today, Tom Dumoulin has no choice: I has to attack, if he has legs for an attack. Others, for instance Chris Froome, may have to fight for a position on the podium. And there can be a fight for positions a bit further down the classification. Chris Froome is third, but there is only 4 minutes and 2 seconds down to Dan Martin who is ninth. Jakob Fuglsang on 10th place does not have a safe lead on Alejandro Valverde and Ilnur Zakarin. I should be some action on this stage. 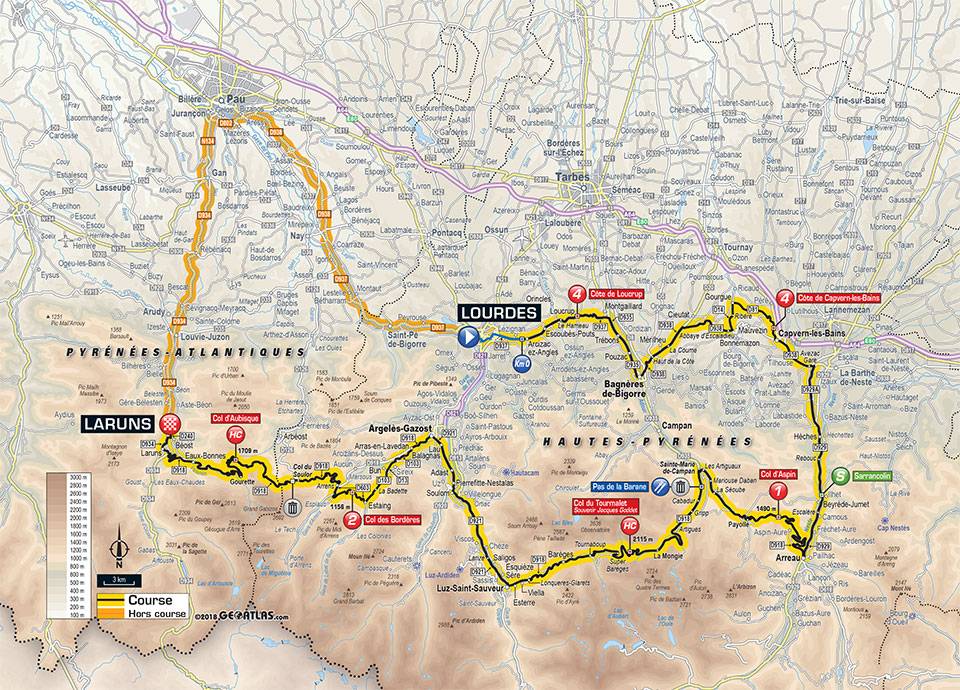 As this is the final mountain stage, I include the profile. 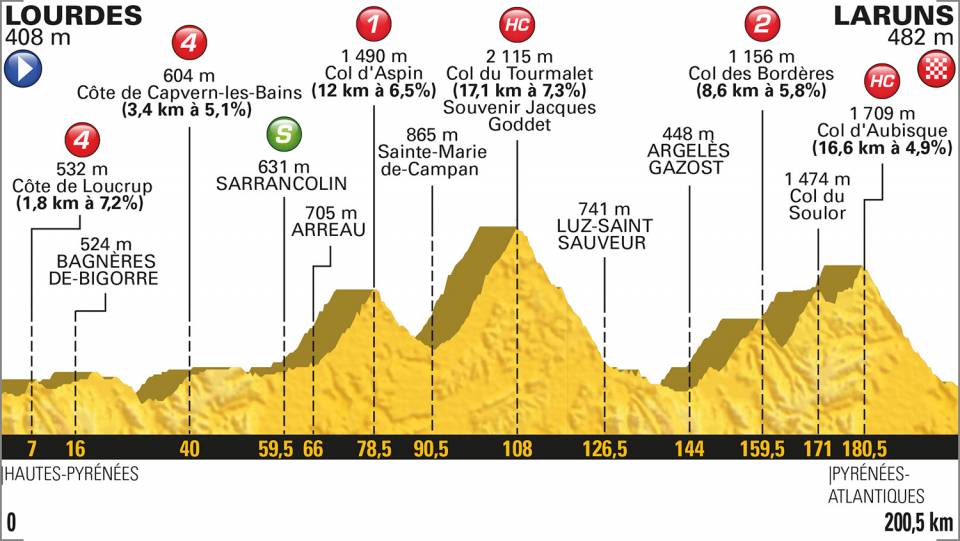 This is another mountain stage where we will not find interesting wine.

The stage starts in Lourdes, the town often called The Disneyland of the Catholic Church. February 11th 1858, the then 14 year old peasant girl  Bernadette Soubirous told that she had seen a lady in the old grotto Massabeille, about a kilometer from the town Lourdes. Bernadette had after that many visions, and the lady in her visions had said that people should drink the water from the source in the grotto, and wash themselves in it. People were of course skeptic. Bernadette was a poor peasant girl with an alcoholic father, and she did not seem to be very smart. But she avoided being locked into an asylum, The Catholic church accepted her visions in 1862,

According to the legend, people who were drinking the water from the source, were cured from diseases. This was the so called miracle in Lourdes. This is the basis for today’s pilgrim industry in Lourdes.

Now there are millions of visitors. I am not sure if they should be called tourists or pilgrims. They are probably both. Some are devoted pilgrims, others may be tourist who just happened to be in the area, such as me. Over the grotto is built a cathedral. The lower part is at level with, and the extension of the grotto, an the level above a more normal cathedral. Along the wall, there are drinking fountains as well as water taps where people can fill up their bottles and cans. There are also bathing facilities. Around are hospitals and other institutions where people can get treatments.

Lourdes has 15.000 inhabitants. But get around 5 million visitors a year. It is the town in France with the largest hotel capacity, after Paris. In the centre, there are mainly hotels, souvenir shops and cafes. The majority of the hotels have a rather simple standard, one or two star hotels.

For a person who is not very religious, Lourdes is a strange sight. There are souvenir shops with names like “The Mercy of God”, “Jesus’ Holy Heart”, etc. Religious souvenirs dominates. Visitors can buy statutes of Bernadette, as well as bottles and cans to fill with water from the holy source. Pligrims bring water home for friends and relatives who cannot make the journey themselves. With today’s airline regulations, with strict limits to how much liquid passengers can bring on board the plane, which also applies to holy water, it is not as easy as it was to carry the water. I only bought a box of peppermint sweets made with water from the source. I have tried eating them when I have had a cold, but they have not hepled me.

The town is international. We can see signs all over, telling that they speak English, German, Dutch, Italian, Spanish, etc. I guess that people from these countries are running the souvenir shops. It is at least not difficult to find shops where they speak for instance Italian, but only a little French.

Pilgrim tourism is big business. Many are flying to Aéroport de Tarbes-Lourdes-Pyrénées. 70% of the passengers at this airport are pilgrims to Lourdes. There are five TGV’s (high speed trains) daliy from Paris. Busload after busload is coming to the town, and there are of course many who are driving their own cars.

I find it somewhere between absurd and grotesque when people in wheel chairs and even hospital beds are pushed to the source so that they can drink from or even be bathed in the water. If you have tried everything, this may be the last resort. It is probably not worse than a lot of the other miraculous treatments that are offered to sick people, often at high prices. The Catholic Church has officially accepted 67 miraculous healings that are said to have happened because of the healing effect of the water.

I chose not to get too close to the attractions, such as the grotto, the source or the many water taps. I am not a very religious person. But I respect other people’s religion. I shall have a good reason to disturb what is holy for other people. My own curiosity is not a good reason.

For a superstitious, catholic cycling team, it may be an idea to use water from this source when mixing the sports drinks that the riders drink during the race. If you believe int its effect, it may be of some help.

The religious, superstitious and womanizing Italian rider Angelo Lamorosse, also called Gigi, in the  first volume of the comic book Le Tour de France, made among others by the cycling legend and now TV-commentator Laurent Jalabert, secured himself a bottle of water from Lourdes, to protect him from the famous Tour de France specatator El Diablo. Unfortunately, they did not publish many volumes of these comic books. There is another Tour de France comics series, Velomaniacs, but I like Le Tour de France better.

Lourdesis a strange phenomen, and can be an interesting place to pay a short visit. But it is a place to tick off on the list “Been there, done that”, after having been there once.

They harvest a lot of blueberries (myrtille) in the mountain areas in France, also in the Pyrenees. Blueberries are rich on antioxidants,  and can be good if you have stomach problems. Both can be good for exhausted cyclists. But Blueberry Liquer Crème Myrtille, is probably not what they should choose. But we who are not going to cycle hard mountain stages, can try a Kir made with Crème Myrtille and Jurançon sec, alternatively a dry Pacherenc-du-vic-bilh.

According to a friend, they make a very good ham in the mountain area behind Lourdes. But I do not know the name of this ham, and have not tasted it.