I did not find the grid start very exciting. There is no reason to repeat this. But short and steep stages give action. The tour is still rather open. Greaint Thomas seems to be the stronger of the two Sky-riders, and Chris Froome seems to have accepted that. Chris Froome has been in the situation where he had to hold back to let the captain, Bradely Wiggins, win. He was quite clear then that the best rider should win. Maybe he has not forgotten.

Philippe Gilbert’s injury turned out to be more serious than they thought at first. 60 km of bicycle racing is probably not the best treatment for a fractured knee cap. But Peter Sagan’s injuries were only superficial, with nothing broken, according to what French TV reported after the medical examination. It would really have been sad if he had to abandon now, when he has already won the green jersey.

Today it is a flat stage. Under normal cicumstances, it would be a bunch sprint. But there is not a bunch of sprinters left to sprint, and it remains to be seen if those who are left still have som punch in their legs, after the mountains. Arnaud Demare still made it within the time limit, with a few minutes margin. Some has hinted that he lost suspiciously little time to Nairo Quintana up the last mountain, and that he could not have achieved that without some help. But I do not know. He is still in the race. 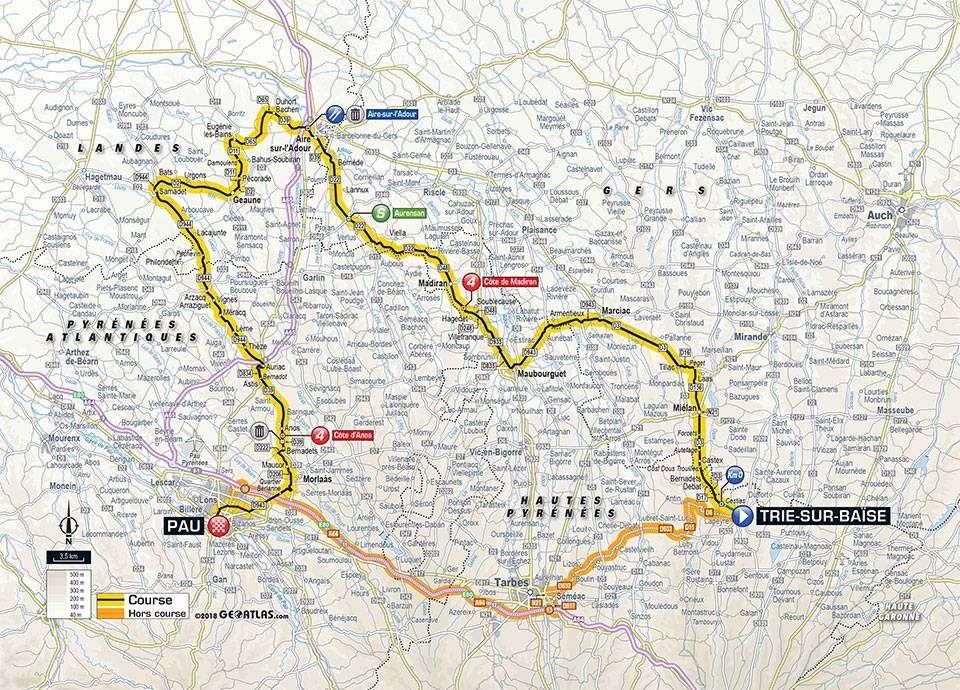 At last, we can find some wine. We will be in the rather strange wine area AOP Béarn, which to me is confusing. By the way, Béarn is more known for the sauce, Béarnaise, than for wine.

AOP Béarn covers three different areas. One is the same as the two geographically identical AOP Madiran og Pacherenc-du-vic-bilh. Antoher is the same area as AOP Jurançon. The third is only AOP Bearn, an area that also includes the sub area Béarn-Bellocq.

Pacherenc-du-vic-bilh covers white wines, made from the grapes l’arrufiac, petit manseng, gros manseng and petit courbu, These are the same grapes used in Jurançon. The area is influenced both by the cool and humid winds from the Atlantic ocean, and the warm and dry foehn winds coming over the Pyrenees from the south. There is a dry and a sweet Pacherenc-du-vic-bilh.

Madiran covers excatly the same area as Pacherenc-du-vic-bilh. It is because of history, tradition and politics that they have different names, and not just a classification for white Madiran or red Pacherenc-du-vic-bilh. Madiran is made from the grape Tannant, which menas something like tanninic. And so it is. It is a grape that gives tanninic wines that should be stored for some time. But also in Madiran, some producers have started to make wines made for more imediate consumptions. Today’s consumers are impatient.

Jurançon is the area between Pau and the Pyreneenes. Pau is one of the cities most frequently visited by Tour de France. There is not very much wine to be found here. We have visited Jurançon many times, and I am sure that we will come back another year. So we skip Jurançon this year.

We can have a stronger final for this day: Armagnac. Armagnac is a grape brandy produced in a designated area in France, just as cognac is a brandy made in Cognac. They produce brandy many places, but they cannot call their brandy cognac or armagnac, just as sparkling wine produced outside of Champagne is not champagne.

Armagnac is divided into three regions: Bas Armagnac, Haut Armagnac and Tenaréze. Only ca 1% is produced in Haut Armagnac, so this is in practice not a very important area. Armagnac starts as a rather boring, white wine. They use grapes that give a wine that is low in alcohol and high in acidity. Ten different grapes are allowed, but in practice they use the first four on the list:

The wine is then distilled. In Armagnac, they usually use an Alambic Armagnacais. These are often realitively small, often mobile. It is made of copper. It is a continuous distillation process. Wine is filled in the wine container at the top. The wine is used to cool the destillate, which again pre heats the wine.

In 2005 the regulation was changed, allowing the production of Blanche de armagnac, an armagnac not meant to be stored. I have not tasted this. I usually prefer my brandy stored. For stored armacnac, the quality designations are:

They also produce vintage armagnac. It shall be from the harvest the year indicated, and it shall be stored for a minimum of 10 years. The Englsish wine merchant Berry Bros and Rudd has a wide selection of  Armagnac, in vintages from 1893 to the most recent they can sell.  They used to have a Duty Free shop at London Heatrhow airport. They did not have a very wide selection at the airport. But w we could order from their catalog, and pick up the bottles when flying out of London. I used to order armagnac from 1955, the year I was born, for my 50 years birthday. Two bottles, each og 0,5 litres, each time (1 liter is the maximum we are allowed to bring into Norway). I thought I had five bottles. But when I was preparing for the birthday party, it turned out that I had seven. My guests did not drink too much, so I still have a few bottles left. This vintage is sold out, so maybe I will keep the bottles til I turn 70.

I find Armagnac more interesting than Cognac. More interesting does not necessarily mean better, just more interesting. We can often find vintage armagnac from small, single producers. Cognac is, just as champagne, to a larger extent sold under brand names that are blended to have a consistent taste from year to year. A Martell VSOP shall taste like a Martell VSOP, regardless of the year it is produced.

One time, a rather long time ago, it must have been in the 1990’s or late 1980’s, I had an interesting experience with armagnac at a good restaurant in Oslo. They had a wide selection of armagnacs. I noted that they had two different vintages of armagnac form the same producer (I have forgotten which one), I think one was 1963, and the other 1971. What we found interesting was that the 1971 was more expensive than the 1963. There was only one way to find out if the price difference could be justified: We had to order one of each. The 1971 was round and balanced, the 1963 more rough and edgy. It was really interesting to taste this difference between vintages in what once was a simple wine that then had been distilled, and stored for many years.

There are also many standardised brand names of armagnac, just as for cognac. And single producer cognacs, for that matter.

Armagnac is often a bith rougher, I am tempted to say masculine, than cognac. One explanation may be that armagnac is distilled one time, cognac usually two.

Tomorrow will be another “dry” stage, so save something for tomorrow.