After a well deserved rest day, I think there are riders that would like to take tre train to Paris, rather than cycle three more mountain stages.

Today’s stage starts relatively flat, with two cat 4 climbs in the first half, before the intermediate sprint.If we look at the topography, the Pyrenees and Montagne Noir form a tract, with Carcassonne located where it is at its most narrow. Carcassonne used to collect toll on goods passing through here, on its way between the Atlantic and Mediterranean oceans. But when the often wet winds are blowing from the Atlantic, it picks up speed here. It can be windy, with should be headwind or cross wind at today’s stage. When the wet air is pressed against the mountains, it is pressed up, cooled down and the humidity is dropped as rain. I have often had fog and/or rain at the French side of the Pyrenees.

This i a warm up before one cat 2 and two cat 1 climbs. Sky is in a comfortable situation. They have been able to control the last stages in a moderate tempo, without caring about breakaways, stage wins etc. Now they can wait for attacks from the other GC-teams, that have to attack. But who should they attack, Geraint Thomas or Chris Froome?

The stage makes a short visit to Spain. The last categorised climb is close to the border, but on the French side.

If I have got it right, it is in theory possible to win 280 points in the competition for the green jersey, given that there is no intermediate sprint on the time trial. Peter Sagan has a 282 points lead over Alexander Kristoff. If Alexander Kristoff should win the rest of the stages, including the high mountains stages and the time trial, as well as all the intermediary sprints, and Peter Sagan should not get any points, Peter Sagan will still win the green jersey if he makes it to Paris. 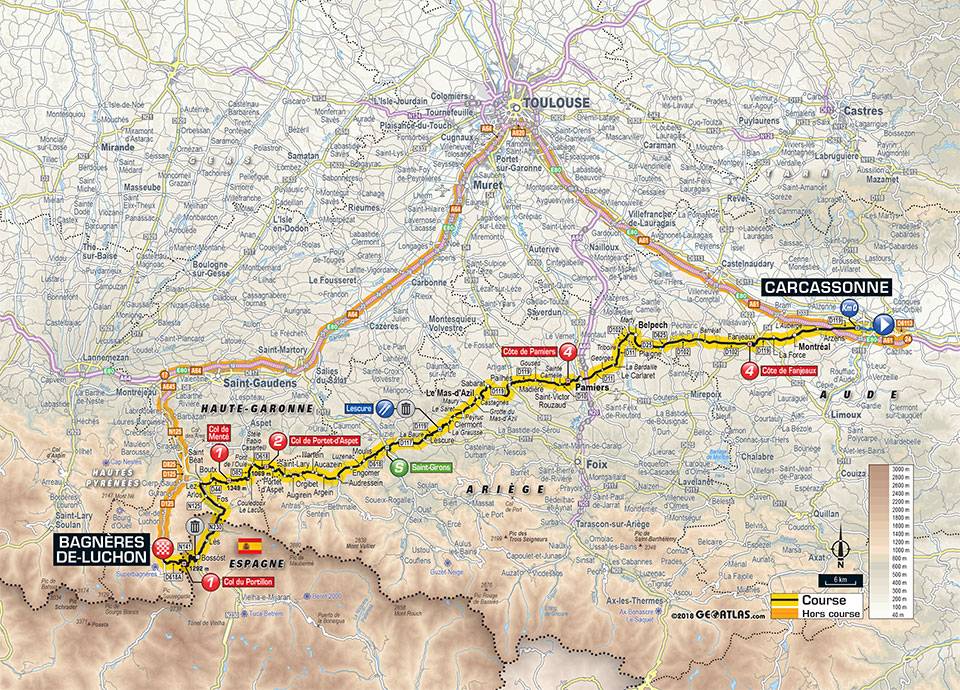 I will go a bit south to find wine for today’s stage, to Limoux. Sparkling wine was probably first made after various accidents. When the fermentation seemed to be finished some time in the autumn, the wine was bottled. But some times cool weather could have stopped the fermentation early. In the spring, when it got warmer, the fermentation started again, in the bottles. Neither the corks nor the bottles where made to take the pressure. Corks were popping and bottles exploding. Many places claim to be the first where they started to make sparkling wine. It is not possible to say where and when they started to get this wild wine under control, and started to make it by purpose. But is the place with the first documented production, from 1543.

In Limoux, they say that the monk DOM Perrignon stayed here and learned the art of making sparkling wine, before he moved to Champagne. But I have not seen this story documented. It is not this story they tell in Champagne.

The old fashioned sparkling wine from Limoux is made with or mainly with the grape Mauzac. It is called Blanquette de Limoux. If it is labelled methode ancestrale, it is made as it was originally made, and from mauzac only. Usually, when they produce sparkling wine with the traditional method, as in Champagne, they first make a still wine. Then some must is added, and there is a second fermentation in the bottle. We will stick to the tradition, and have champagne for the final in Paris, and we will come back to champagne production then. With methode ancestrale, there is no second fermentation. The wine is bottled before the fermentation is finished, and the first fermentation is finished in the bottles. If I have understood it right, it is a difficult process.

To be honest, I find this wine more interesting than good. They cannot remove lees and other sediments from the fermentation, as they do with the traditional method. Dry wine is a modern concept. In the old days, the wine should be sweet, or at least not dry and sour. The Blanquette de Limoux, methode ancestrale that I have tasted, has not been dry.

Gaillac is another region where they also claim to be the first to have produced sparkling wine, but they do not have any documentation as old as the documentation from Limoux. I was in Gaillac earlier this year, and among the wines I bought, was a bottle of sparkling wine, made with this method. In Gaillac they call it methode Gaillac. It is made from Mauzac, the same grape as in Limoux. The wine merchant said that it is dry. I have not yest tasted it. I will open the bottle the next time a Tour de France stage goes through Gaillac. There are stages through Gaillac quite frequently.

In Limoux, they also make more modern, sparkling wine. There is one Blanquette de Limoux, without the added methode ancestrale, made using the traditional method with second fermentation in the bottle. It must be made with a minium of 90% Mauzac, and in addition there can be Chardonnay and Chenin blanc. And there is a Cremant de Limoux, that shall have a minimum of 60% Mauzac.

The stage continues in the departementet Ariège, on its way to the mountains. The tour use to visit Airège every year. I have tried many times, but I have yet to find interesting wines from Ariège. I have read about some producers who are said to produce high quality wine. But I have not found this wine, not even when visiting Ariège. Sparkling wine and white wine from Limoux will be the wine for this stage.

By the way: Bring an extra bottle. Tomorrow it will be a dry stage, at least not a stage with much wine.