Five riders sprinting for the stage win at the top of Alpe d’Huez after a very hard stage, was not what I had expected. Geraint Thomas seems to be the better sprinter among these riders. I do not know how fast he was riding. But at the end of stage 11, when i passed Mike Nieve, he acellerated from 31 km/h to 41 km/h. I find it hard to come up to 40 km/h when it is flat, without having cycled over two hard mountains first. If Chris Froome shall win the tour, it will be a challenge for Sky to let him take two minutes on Geraint Thomas without having it look like they are faking. Tom Dumoulin is strong. But he does not have a team as strong as Sky. He does not have a rider like Geraint Thomas to help him.

Today’s stage  is a stage where the sprinters can excel again. But there are almost none of them left. The majority of them has either abandoned the race, or have finished outside the time limit.

With so many sprinters out of the competition, it can be yet another race. It is the sprint teams that usually will close the gap to a breakaway, to get a bunch sprint. If they do not have anyone left for the sprint, why should they use energy to catch a breakaway? Without the sprinters, it will be more important to get someone in the breakaway. For the GC-contenders, a stage win is not as important as for the teams and riders who are mainly competing for stage wins. If a rider who is an hour behind in the general classification should win a stage with a margin of a few minutes, it is not a threat to them in the competition for the general classification. 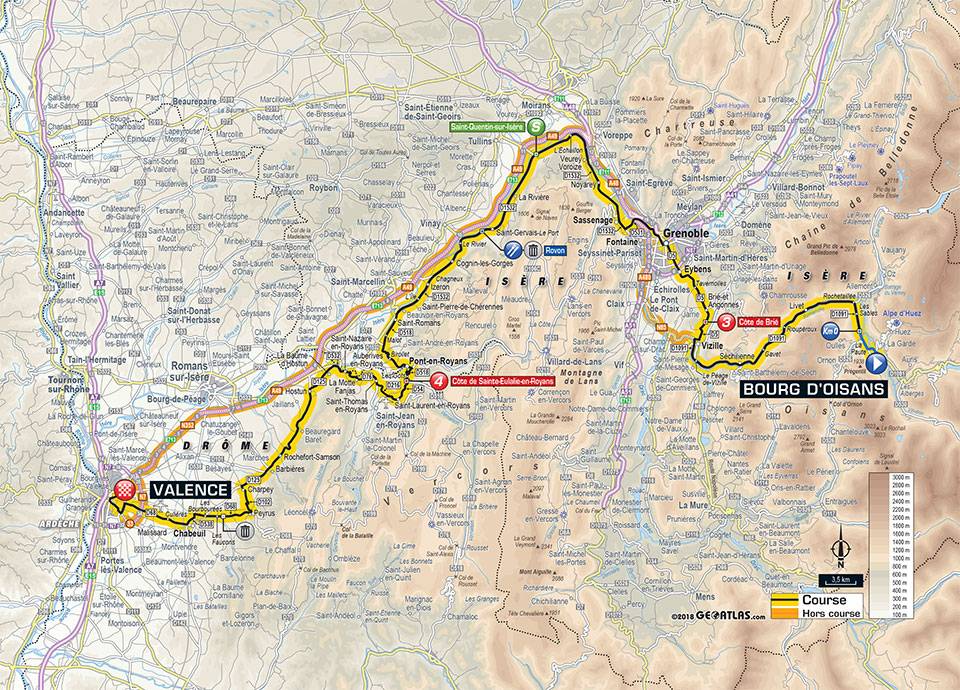 We are finally coming into some wine districts. The stage starts in Bourg d’Oisans, at the foot of Alpe d’Huez, and ends in Valence in the Rhône valley. 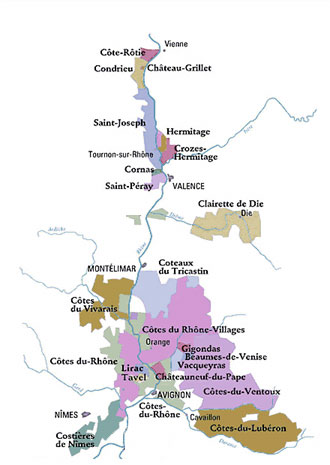 The Rhône valley is a rift valley between the Alps and the Massif Central. The geology on the two sides of the river are quite different. We can note that in the northern Rhône, the more interesting wine areas are on the western side, or the right bank, as they say in France. The concept of right bank and left bank is not very difficult, as long as you know in which direction the river flows. It is the right and left side when looking or going downstream. Hermitage and Crozes Hermitage are exeptions, as they are good wine areas on the left bank. But here the river has found a new way not following the rift. Geologically, they belong to the right bank.

In the Rhône valley, there can be hard winds. Mainly in the winter, but also in the summer. It is the Mistral a wind coming down from the mountains, that blows down the valley. I was cycling the ViaRhona route two years ago. When cycling from Lyon to Valence, I had this wind. But I had it mainly as tailwind, and sometimes at cross wind. I wanted to visit Montèlimar, and then I had to make a turn and cycle to the north and got it has headwind. I would have had a hard day on the bike if I had had this headwind all the day.

The riders come into the Rhône valley from a side valley, and will not be affected by any Mistral winds before the finish. I like to mention the excellent hotel/restaurant Maison Pic in Valence. It is a three star restaurant, and at least the last time I checked, it was the only three star restaurant with a female chef. Eating at three star restaurants is expensive. And the hotel is not a budget hotel. But we had an unforgettable experience and have good and lasting memories from this place.

We can start with the wines from the areas close to Valence: Saint-Péray. It is actually across the river from Valence. The area is protected from the cold winds from the north. Most of us think of Rhône as a red wine district. But in Saint-Péray, they produce white wines from the grapes marsanne, rousanne and bergeron. 70% of the production is sparkling sparkling wine, made by the traditional method, as in Champagne. In the 19th century, sparkling wine from Saint-Péray was more popular than champagne, but its popularity has faded. Napoleon Bonaparte said that his first experience with wine was when he, as a young cadette in Valance, was drinking Saint-Péray.

If we go a bit further north, we find the twin towns Tournon sur Rhône at the right bank, and Tain Hermitage on the left bank. 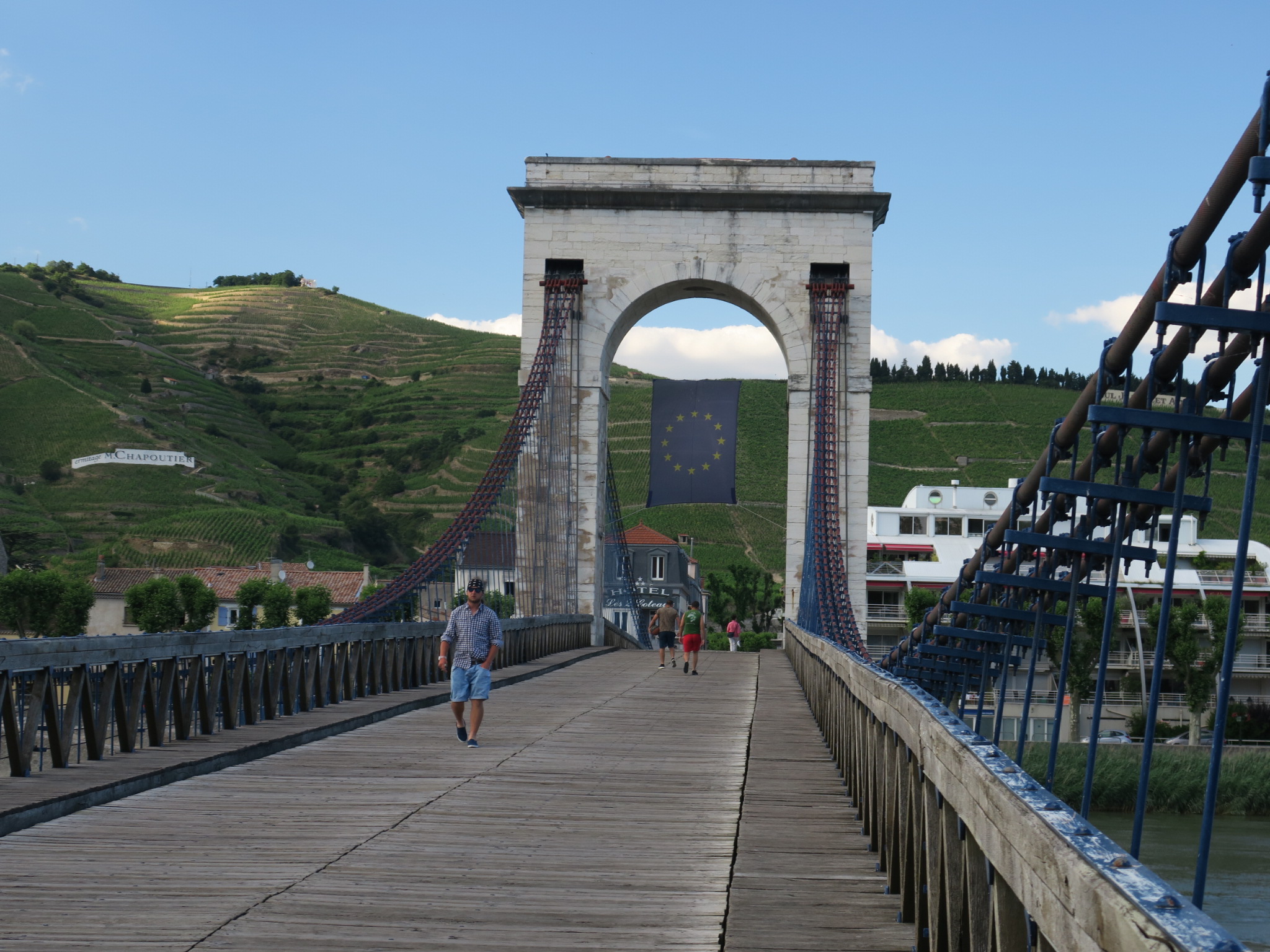 If they are twin towns, they are by no means identical twins. On the surface, Tournon sur Rhône seems to be the more interesting of the two, with a charming old town (but with a too large parking lot towards the river, destroying the riverside). But Tain Hermitage has more to offer. Here we find the wine areas Hermitage og Crozes Hermitage.

Hermitage is one of the great, French wines. It is a tanninic, masculine wine that can be and should be stored for some years. It is said that it can be stored for 40 years. Syrah, a grape originating from the northern Rhône, is the dominating grape. It is allowed to use some white grapes in the wine, but it is not done very much anymore. Crozes Hermitage is the little brother, that is less expensive.

There is also a white Hermitage, produced from roussanne and marsanne grapes. This grapes give an aromatic wine. White Hermitage should also be stored, and can be stored for 15 years.

In addition the these wine areas, Tain Hermitage is the home of Valrhona chocolate, one of the best quality chocolate one can get. Some years ago, I had the pleasure of attending a four days chocolate course at Valrhona. One thing I remember from when we were taken on a round in the production facilities, is that when other chocolate facotries were modernising, Valrhona bought their old equipment. They said that they could not get the same quality with modern, automated equipment as they could with older, manually controlled equipment, with good craftsmen.

We also had some wine tasting when in Tain Hermitage. I got the impression that the wine producers served better wines when Valrhona had booked a tasting for people attending some of their courses, than they would serve for a typical tourist tasting. 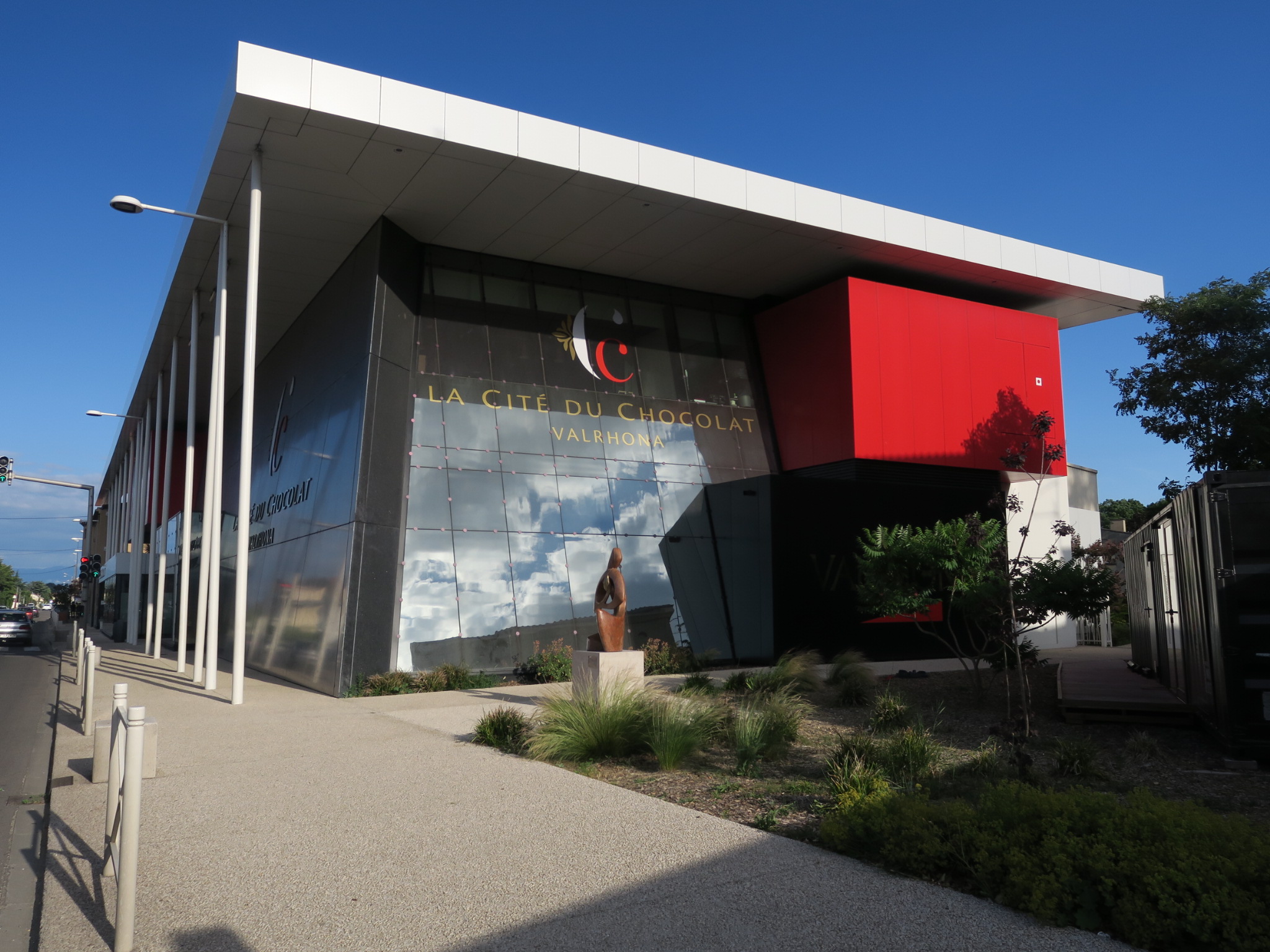 Across the river, around Tournon sur Rhône, we find the wine areas Cornas and Saint-Joseph. Cornas is a red wine made with 100% syrah, and is an excellent wine. Saint Joseph does not have to be aged for as long time. It is said that people are drinking Saint Joseph while waiting for the Cornas to be ready to drink

Rhône wines are good with game, tasty meat low in fat. We usually have groose for dinner on the Boxing day. I usually serve either Cornas, or a Côte Rôtie for these dinners.

North of Saint Joseph, is Condrieu, a white wine district. Here they produce white wine from the grape Viognier. The best vioginer wines come from this area, which is also reflected in the price. Viognier usually gives an aromatic white wine. I like it. It can be a bit to dominating with fish and other sea food. It is a white wine I prefer to serve with chichen and other white meat. The smallest appellation in France, Chateau Grillet, is located within Condrieu. It is an appellation that covers only one producer. 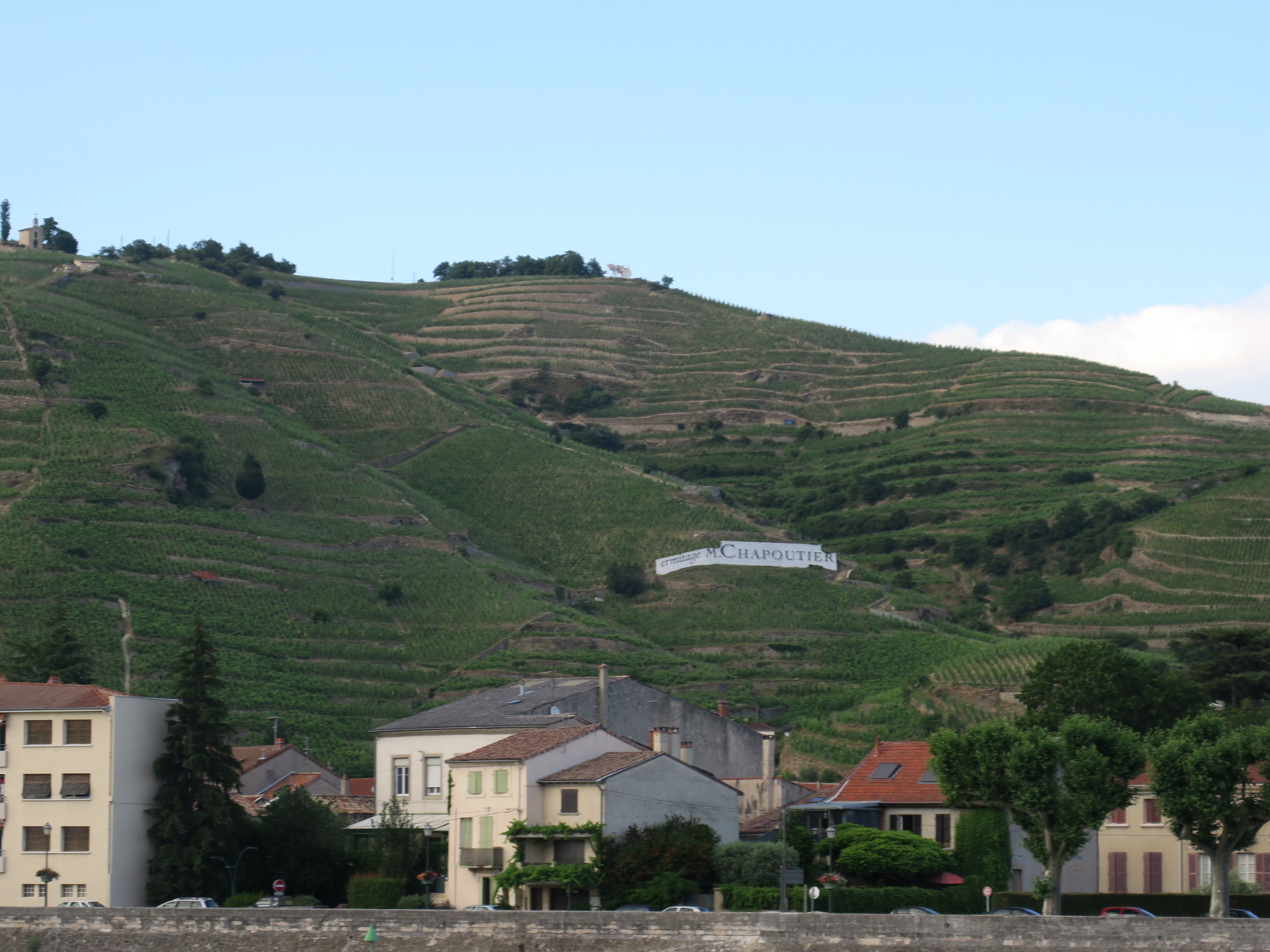 When we are that far north, we must include Côte-Rôtie, an excellent red wine that I like to serve with groose and other tasty game. 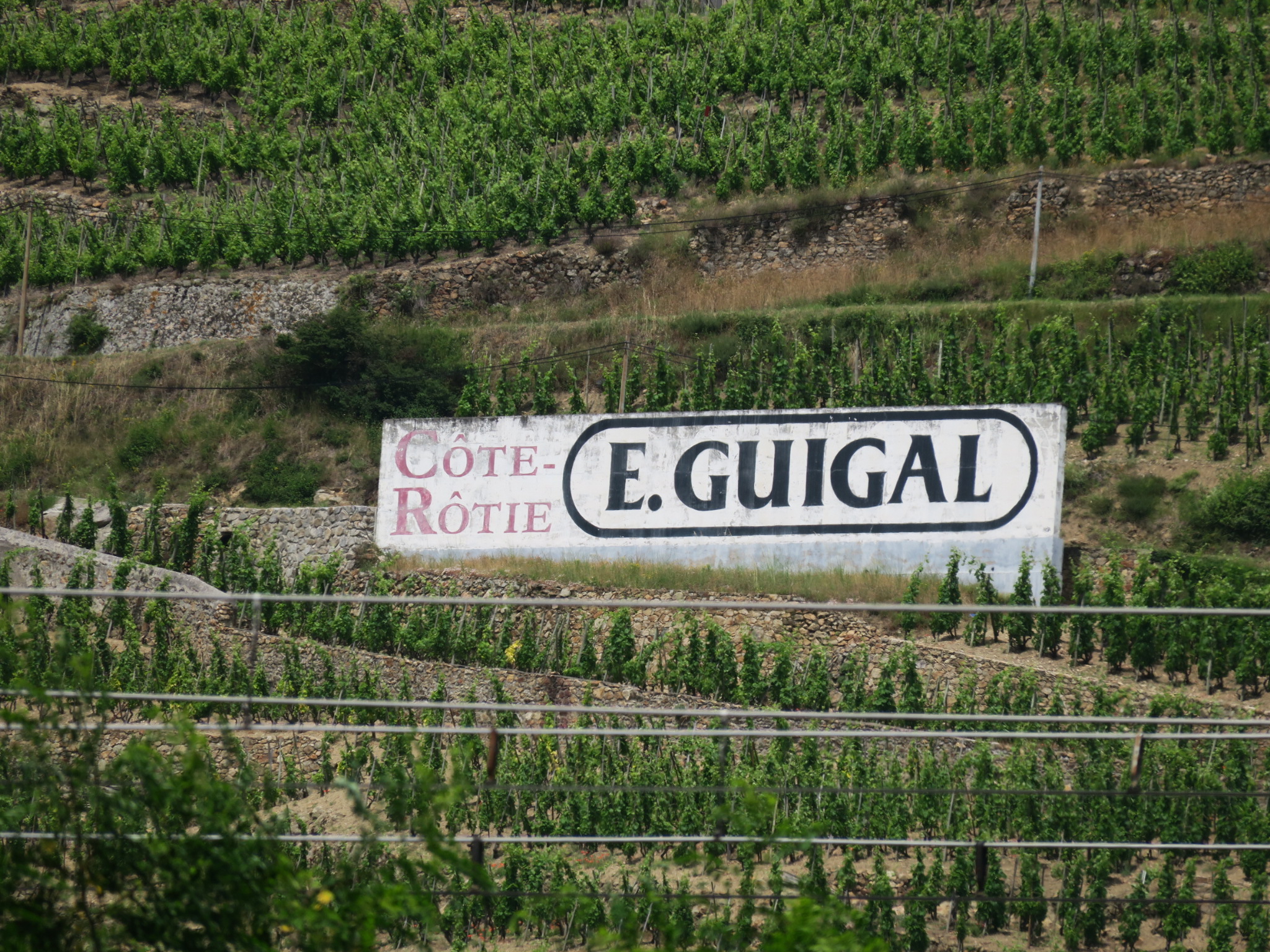 The best Rhône wines come from the northern part. They are also the most expensive Rhône wines, which shuold come as no surprise. But there are very good wines from the southern Rhône as well. We will come back to some of them tomorrow.