The classification after yesterday’s stage looks more like what I had expected after Tuesday’s stage, with the GC-contenders within a not too large time span. Sky demonstrated strength when Geraint Thomas could win the stage and get the yellow jersey, at the same time as Chris Froome seems to be in control. But it must have been bitter for Mike Nieve to be passed a few hundred meters before the finish, after having led the stage as he did.

Marcel Kittel, Mark Cavendish and Mark Renshaw finished outside the time limit, and are out of the race. It seems that Rik Zabel was told by the team that Marcel Kittel did not have a chance, and to get himself to the finish within the time limit, so that the team would not loose two riders. He managed to do so with a one second margin.

Today’s stage is just as brutal. It starts with a moderate descent, but this is only some teasing before the climbs. They have  Col de Madeleine (HC), then Lancets de Montvernier (2 cat) as an intermdeiate klimb, before Col de la Croix de Fer (HC), and then a mountain top finish at Alpe d’Huez (HC). The stage is longer than yesterday’s stage. But there are no flat sections where riders can “relax” and catch up. The sprinters who were at their limits yesterday, may struggle today. The sprinters who survive, will get another chance to show off tomorrow. 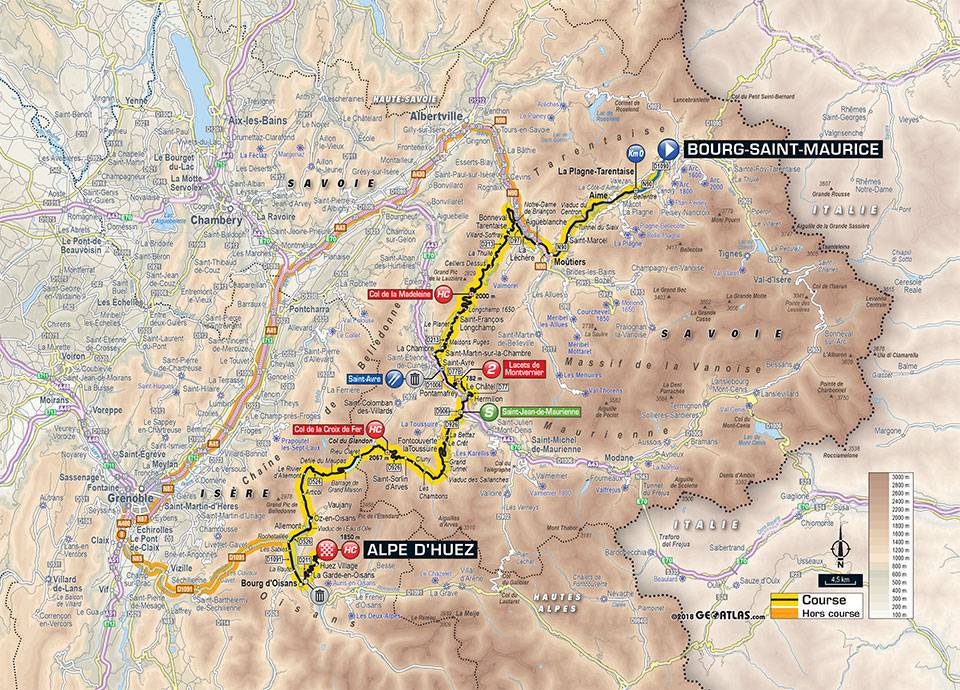 With all these mountains, and hardly any section of the stage below 500 meters, it will be difficult, but not impossible to find wine. But I will start with something else than wine.

When the riders are down the first descent after start, and start the climbing up to Col de la Madeleins, they pass Moutieres. Here they are only a few kilometres from a place called Salins les Theremes. The name tells us two things: Salins tells us that it is, or rather that they have produced salt here. Thermes tells us that there are thermal springs.

The Alps are mountains formed in the collision zone between the African and the European continental plates. Also in geological sense, Africa is pushing on Italy when putting pressure on Europa. This gives volcanoes and earth quakes in Italy. The Alps are, as far as I know, mountains that are still growing from the bottom, but erosion prevent them from getting higher.

In the west, the Alps collides with Massif Central, which is older than the Alps, which again collides with the Pyrenees in south west. These collision zones are geologically active areas, with among other things, thermal springs. Names like Bains and Thermes tell us that. It can be earth quakes in Savoie too, but not as frequent and strong as in Italy. In Salins les Thermes they have produced salt. There are other places in the area with Salins in the names, telling that we are in a salt producing area.

We are close to the Italian border. From here, via Pralognan-la-Vanoise, there is an old salt route through the national park La Vanoise, the oldest national park in France. Salt is important for conserving food and for cheese production. From the 13th to second half of the 19th century, convoys of mules were transporting salt along this route to Piemonte in Italy. France and Italy have not always been as they are today, and the borders have been rather unclear in these mountain areas. But I will not go into this history. 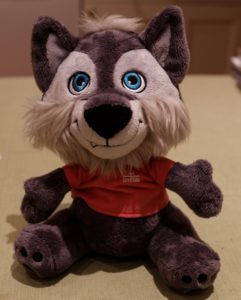 In the national park La Vanoise there are, among other animals, wolves and lynxes. In Norway we have conflicts between farmers and those who will preserve wild life and predatory animals. If African countries had treated their iconic predatory animals as badly as we treat predatory animals in Norway, there would have been an uproar. They do have these conflicts in this part of France as well. In the recent years, Giro d’Italia has had a wolf,  Lupo Wolfie as mascot. When stage 19. in Giro d’Italia i 2016 ended in this area, the French farmers protested. They said that Lupo Wolfie was a provocation, and said that he was not welcome in France.

The other place I will mention is Saint Jean-de-Maurienne, where the riders will have the intermediary sprint before they start the climb up to Col de la Croix de Fer. Here we find the knife producer Opinel,  who has produced knives since 1890, when Joseph Opinel invented the iconic folding knife with wooden shaft. 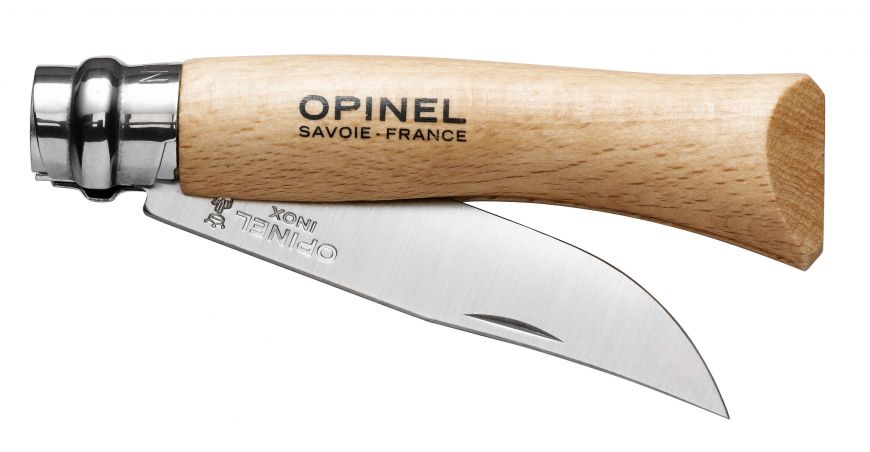 The last part of the stage is in the departement Isére. It is possible to find wines from here, at least if we are in the area, classified as IGP Isére. If we go across to the valley north-west of the stage, we find the ares IGP Coteaux du Grésivaudan, in the slopes of the Massif Chartereuse. Here the grapes get at lot of sun, and there is a warm micro climate. They produce mainly white wines, but also some reds and rosés

They grow some traditional grapes that we cannot find many other places. L’Etraire de la Dui  is a red/black grape from Isére, that gives a tanninic, fruity and spicy wine. It is said to go well with game, according to my sources.

La Verdesse is a white grape from Isère. It gives a wine high on alcohol with a yellowish colour.

Le Persan is a red/black grape originally from Saint-Jean-de-Maurienne, that is now grown in les coteaux du Grésivaudan. It gives a tanninic wine that is said to go well with red meat, duck and goose.

IGP is a classification on a lower level than AOP. There are some excellent wines produced with IGP classification, and also in the even lower table wine classification. The stricter AOP regulation can limit the room for experimentation with grapes that are not traditionally grown in an area, and product development in general. For this reason, some producers prefer to have their wines in the IGP rather than the AOP-classification. But we mainly find this in regions where there are AOP-classifications. If there are only IGP-classifications, it indicates that the wines from these regions do not have a consistent lever of quality that will qualify as AOP-wines. But there are often some producers who really put emphasis on quality, and produce very good wines, also in these areas. Wines from these areas are usually hard to find outside their regions. We are in an area with many well known ski resorts. Most of the wine is drunk by the locals and tourists in the area.

Tomorrow, we will be going down to the Rhône valley, where we should be able to find good wines.