Another win for Dylan Groenewegen. Dan Martin lost time after the crash. Fernando Gaviria and André Greipel who finished second and third, were relegated, and I did not really get why it happened.

Stage 9 is cobbles, with many cobbled stretches that should be known from Paris Roubaix. But as they change the course a bit from year to year, it may not be the stretches that they were riding this year. The finish is not on the famous velodrome in Roubaix, but just outside of it.

Cobbled stages are not for the light climbers. Tour de France has classified it as “hilly”, which in reality it is not. There is not a single classicied climb. But hilly is probably the closest they have among the categories they use. It was on a cobbled stretch Chris Froome crashed in 2010, causing him to abandon the race. I hope this will not happen for any riders. It should not be injuries that should decide the race, but we knows it sometimes happens.

The stage will probably not be a stage for the typical sprinters either. I guess it will be a stage for some of the classics riders, who may as well be good sprinters, or the strong spirnters. Peter Sagan won Paris Roubaix this year, and he can of course win on this trerrain again. Greg van Avermaet is still a candidate. He has won Paris-Roubaix before. And it could as well be the Norwegians Alexander Kristoff or Edvald Boasson Hagen. When comparing with Paris — Roubaix, we have to bear in mind that this classic is around 250 km long, today’s stage is 156,5 km, almost 100 km shorter than Paris — Roubaix. Edvald Boasson Hagen has often faded near the end of the long classics, maybe this shorter stage will suit him better. As a Norwegian, I can at least hope for that. I am also thinking of John Debenkolb as a favourite for this stage. 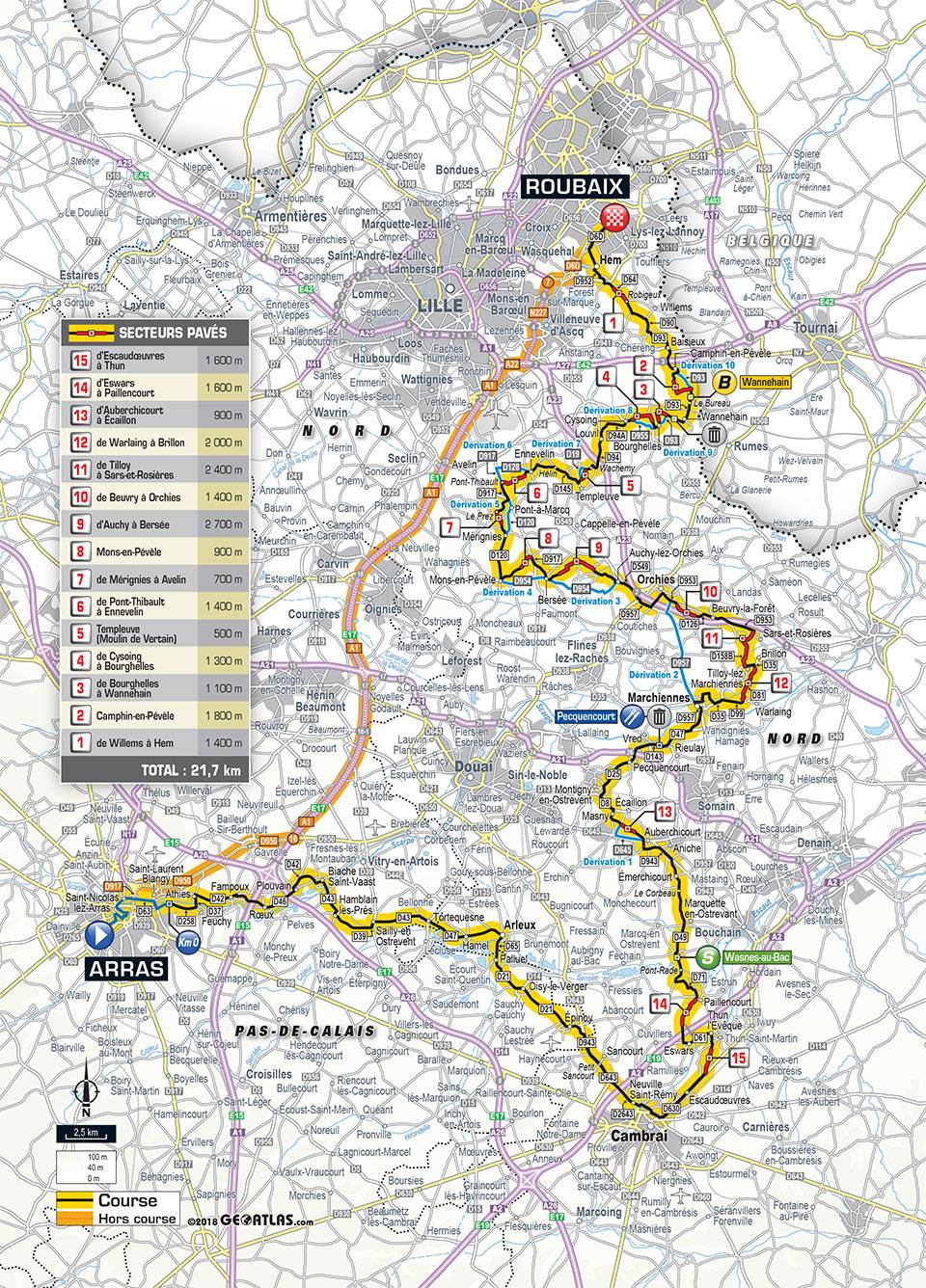 We are in the department Nord pas de Calais, in the region now named Haut de France, which is former Nord and Picardie. This is French Flanders, and an area with a rich beer culture. A little more than five years ago, on July  18 2013, the French Senate decided to give beer in this area status as  “patrimoine culturel, gastronomique et paysager protégé de la France”. I do not know what the practical significance of such a staus will be — if any.

We are close to, but not over the Belgian border. I choose to include a “border beer”, that we find a bit east of today’s stage. Brasserie su Baron is located in the small town  Gussignies, at the Belgian border. The brewery is only 200 meters from the border. The brewery is connected to a restaurant with the same name. It is their, La Cuvée des Jonquilles that has gotten many prizes ans a lot of attention, and the authors of  1001 Beers You Must Try before You Die think you should try before you die.

A few kilometres east of where the riders enter the first cobble stretch, we find the tow Jenlain, where we find the brewery Brasserie-Duyck. has been given the honour of reviving Bière de Garde. Bière de Garde, beer to store, was traditionally brewed at farms in the winter and spring, to be stored for the summer. Beer was brewes for imediate consumption. But in the summer, it was too warm for brewing. That is why they brewed a beer that could be stored until it again for season for brewing. It is the same as with the Belgian Saisson.

Brasserie-Duyck sells their beer under the label Jenlain. It was sold in champagne bottles from around 1950. In 1968, they started to sell it as Jenlain Ambrée. At the time french breweries were about to give up traditional brewing and switch to bottom fermented beer, Jenlain Ambré became a cult beer among students in Lille, and sale started to increase. It is a classic bière de Garde, and among the  1001 Beers You Must Try before You Die. The authors mean that you should also try Jenlain Blonde, som a ighter version of Bière de Garde. They also recommend their Christmas beer, but we are a bit out of seaseon for this on.

Their prestige beer is Jenlain Or [gold], also a blonde. We can also include their Éclats d’Ambrée, a vintage beer.

Jenlain is a beer with good distribution, at least in France. It can be found in supermarkets all over France.

A little east of the intermediary sprint, is the small town Hordain, and in this town we find Brasserie la Choulette. Their La bière des Sans Culottes er is another Bière de Garde among the 1001 Beers You Must Try before You Die. They also have a fruitbeer, and the authors of this book think we must try their Framboise (raspberry) before we die. This is a beer from La Choulette that I have not tried.

Tomorrow is a rest day.