Stage 7 is another flat stage, and it will probably be another bunch sprint. 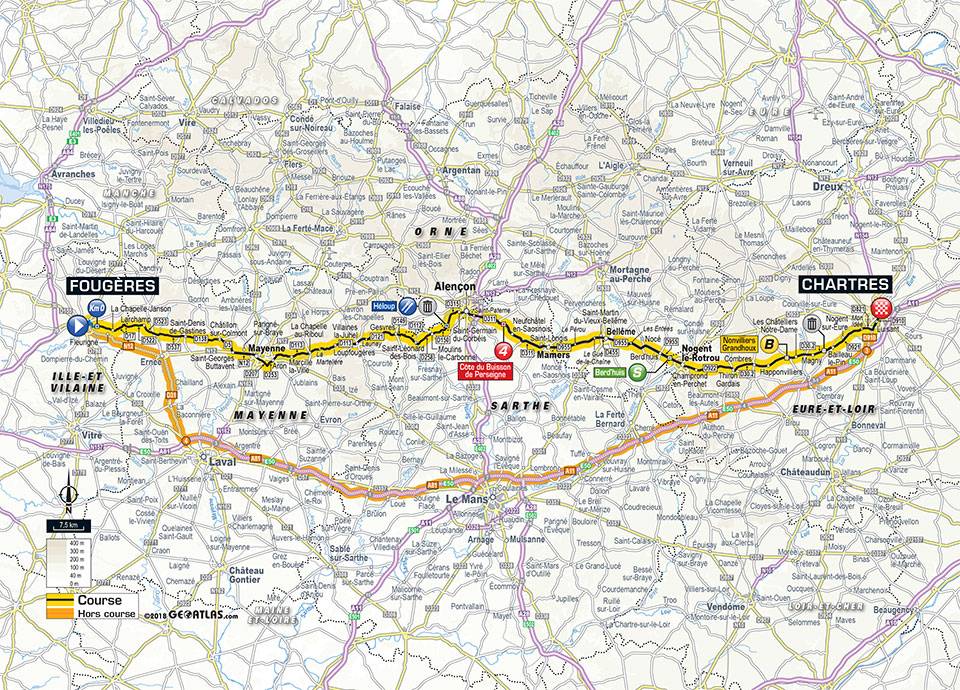 A large part of this stage is in le Parc naturel régional Normandie-Maine. It seems to be mainly forest in the border area between Loire and Normandy. I find information about hiking and cycling in the area, but not very much about regional products. For one who is searching for local drinks and food, it seems to be a kind of “neither nor” zone.

I find something called  La Route du Poiré, the route of pears. It includes a pear museum and a cider museum, and a little about Calvados. It indicates that pears and pear products is the regions speciaity. But I have not found much information on this either.

Stage 7 and 8 do in a way circumvent the main production area for Calvados. If we go a bit north of today’s stage, we come to the town Domfront, which has given the name to the calvados-appelation AOP calvados Domfrontois, which shall include at least 30% of pears and shall be stored for at least three years in oak barrels. We could include this as a pear drink for today’s stage. We will come back to calvados tomorrow.

Where they make apple- and pear brandy, they of course also produce cider. In my comment to stage 5, I said that I often find pear cider to be too sweet. I have to step a bit back on this. A few days ago I got served the pear cider NV Pacory Poiré from  Domfront, to the dessert at the excellent restaurant Noa in Tallinn (Estonia). It was part of the wine pairing. It was very good with the dessert. The sommelier had found many good and interesting wines to this wine pairing. We had some interesting conversations about the wines and his choices. I like menus with wine pairing at good restaurants. They often include wines, and sometimes other drinks, that I do not know, and would never have ordered. I would not have ordees pear cider to the dessert. I have learned a lot and discovered many good wines from these wine pairings.