I held Greg van Avermaet, and not Peter Sagan as favourite on yesterday’s stage. But we never know with Peter Sagan. Antoher impressive win from him.

Stage 6 is another hilly stage. I have Greg van Avermaet and Vincenzo Nibali as my favourites. But as I just wrote: We never know with Peter Sagan. He may do it again. 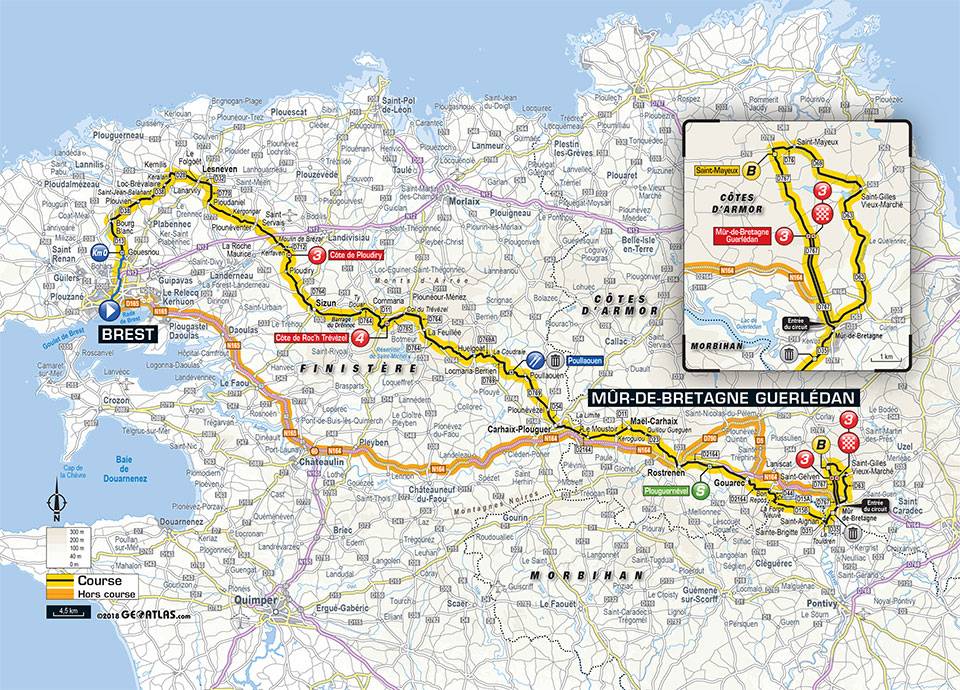 I have chosen to include the profile for this stage as well. 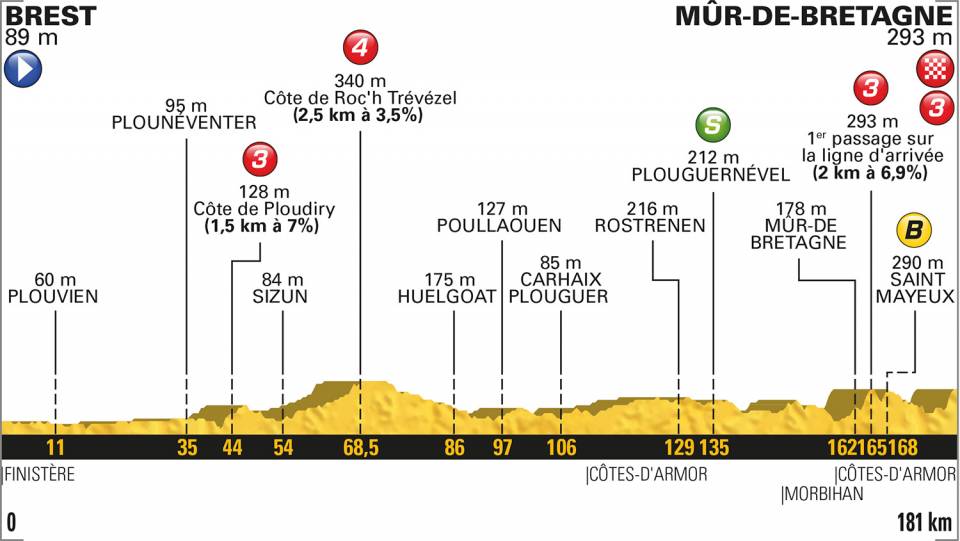 When in this region, we will stick to celtic drinks, and it is mainly beer this time. They are brewing a lot of interesting beer in Brittany. They brew interesting beer many other places as well. If I should be honest, the micro breweries often make the same kind of beer, and there is not very much diffrence from one IPA to another. Being small does not always mean being good or the best. It is not without reason that some “micro breweries” have grown out of this category.

My main source for information on breton beer is the book  Deux siècles de bières en Bretagne, in addition to information I have found on the net, as well as tasting a number of breton beers..

The word bière seems to have had a kind of a detour into the French language. According to Larousse Dictionnaire Étymologique it comes from the Dutch bier, a word many of us know from the German word  Bier. When we find the same word in English Oxford Dictionary is ofte beter when it comes to etymology. According to Oxford Dictionary, the wod came to English from  West Germanic, meaning German and Dutch.  But the German word comes from the latin word biber, meaning a drink. This is again derived fro mthe latin word bibere, meaning to drink. The latin word has taken a detour via germanic languages, into th e mainly latin based French.

The word substituted the old word la cervoise, which was a kind of beer made without hops. I mention all this because many in Brittany seem to prefer the word  cervoise, which is basically the same word as the Breton korev and the  Welsh cwrw. Many will see that it is the same word as the Spanish cerveza and the Portugeese cerveja. We can add that it is cervesa in Catalan and Occitan.

In these days we are hearing a lot about problems with CO2, be it too much in the atmosphere causing global warming, or lack of CO2 for cleaning of water, brewing, etc. I will make som comments about brewing.

During the fermentation, sugar or starch produces alcohol and CO2. If kept under pressure, the CO2 will dissolve in the liquid, creating carbonic acid. In traditional brewing in casks, the CO2 creates the bubbles in our beer. In industrial brewing, CO2 is added in tanks, under pressure. The brewing industry have problems caused by lack of CO2. In craft brewing, the fermentaion, or rather the second fermentation is done in casks, bottles or cans, producing its own CO2, Buy crafts beer, or artisan biere as they say in French, and shortage of CO2 supply should not be a problem.

Back to Brittany and beer. We really do not know for how long time they have been brewing beer in Brittany. They have done so for some hundred years, but we do not know how many. At the beginning of the 19th centrury, there were many breweries. But as happened so many places, the brewing was industrialised and the beer standardised by the end of the century. At the end of the 20th century, traditional brewing had its rennaisance. In Brittany, it grew alongside breton nationalism and revitalisation of breton culture in general. The brewers were helped by the enthusiasm for breton traditions and breton culture, even when they had not learned their craft properly. Brasserie Lancelot had their first beer ready July 12 1989. The first time I got served beer from  Lancelot was at a breton restaurant (in Aigues Mortes in Languedoc-Roussillon, a far distance form Brittany) I thought that Lancelot was a very good name for a product with celtic refernces. But the brewery was started by Bernard Lancelot. He had been working in the atomic industry, but wanted to do something else. He stared with bees, but the bees were destroyed by a parasite. He then turned to brewing.

The beer Lancelot is a golden beer. It is a top fermented unfiltered beer, with second fermentation in the bottle. The producer compares it with BelgianTrappist-beer. I do not know what the Trappist-beweris think of this comparision.Trappist is not a style or a type of beer. It only means that the beer has been brewed within a Trappist monastery according to the rather strict rules for Trappist beer. There are many types of Trappist beer, and not all of them are Belgian. It makes such comparisions a bit dubious.

During a hunt, the legendary breton king  Conan Mériadec saw an ermine beside a mud pond. Rather than to have its white fur dirty, the ermine walked in the direction of the hunters. This was the origin of the breton saying of rather die than to get dirty., and to the beer Blanche Hermine from Lancelot. Ermine is an animal that is emblematic of Brittany. The beer is a white wheat beer, rather low in alchol. A refreshing beer on a warm summer day.

Bonnets Rouges (the red hoods) is a beer made with elderberries, which give the beer its red colour and fruity taste. In 1675 the bretons revolted against the French king, who introduced new taxes without the consent of the breton parliament.  The rebels, insurgents or whatever you prefer to call them, used the red hood as a symbol of freedom. This beer is named after them.

The beer TeLenn Du, marks the celtic. It has a breton name, meaning black harp. The beer is made with buckwheat. It is brown, light and a bit sweet.

La Brasserie Artisanale Touken is a small brewery tat opened May 12 2007, that makes the beer  under the name Philomenn.

Philomenn is also inspired by Trappist beer. Aong other beers, they brew well known types as  Blonde and  Stout. I will also include  Philomenn Tourbée. Tourbée means peat. It has a smokey taste, from the drying of the malt. It reminded me a bit of Islay malt whisky, such as Laphroig, Talisker and Ardbeg.

Britt Brasserie de Bretagne is another well known breton brewery. It is one of the breton brweries that has a rather good distribution outside of Brittany.

Until the first time I visited Brittany, I had always been thinking of the Puffin as a typical Norwegian and Icelandic bird. But it can (or at least could) be found in large number in Brittany, and is a symbol of the region.

In Brittany, they do as their celtic brothers further to the west. They make whisky. There are three whisky distilleries in Bittany. Des Menhirs, Glann Ar Mor and Warenham. If French whisky is unknown to you, it was for me as well, until I started to search for breton drinks.

I bought a bottle of Eddu Silver from Des Menhirs at the breton shop Chemins de Bretagne in Paris. Unfortunately this shop no longer exists. According to the lady in the shop, this should be the reference for breton whisky. It is made from buckwheat, which is called eddu in breton, if I have got it right.

When I first tasted it, I was not too excited. Over the years I have tasted a number of whiskies, mainly scottish malt whisky, some irish whiskey, and some others, whisky made from barley. This breton whisky was fruity with no smokyness. Eddu tasted very different from scottish malt whisky.

I decided that I had to give Eddu a second chance. When we taste something with certain expectations, for instance of what a whisky should taste like, and these expectations are not met, we tend to get disappointed. The second time, when I tasted Eddu without these expectations, it was an interesting drink. But I still prefer a scottish malt if I want a glass of whisky.

When we are in Brittany and mention the revival of breton culture, we have to mention the musician Alan Stivell. Here he is performing the song Tri Martolod at Festival des Vieilles Charrues in the year 2000. Tri Martolod means three sailors. It is an old breton song, made popular by Alan Stivell. Three sailors are taken by the wind, ending up in New Foundland. There they meet a girl, who they, or at least one of them, thought they/he had met before. They had met at the market in Nantes, and he had promised her a ring. No, I do not understand the breton lyrics, but I have read a French translation.

I have not been in Brittany for some years. It is a region I would love to revisit.