Another sprint victory for Fernando Gaviria, and another runner up for Peter Sagen, who tightened his grip on the green jersey.

Stage 5 is in a more typical breton landscape. It is a hilly stage. There are many short, and sometimes steep hills, but not any real mountains. Two category 4 and three categori three climbs and many unclassified climbs can be hard enough. The stage ends with 1 km ascent at 4,8%. Not a challenge for the real climbers, but too hard for the typical sprintes. It will not be a stage for riders like Fernando Gaviria. But Peter Sagan is not a typical sprinter, and he may well collect some points on this stage too. But I think this will be a stage for riders like Greg van Avermat. 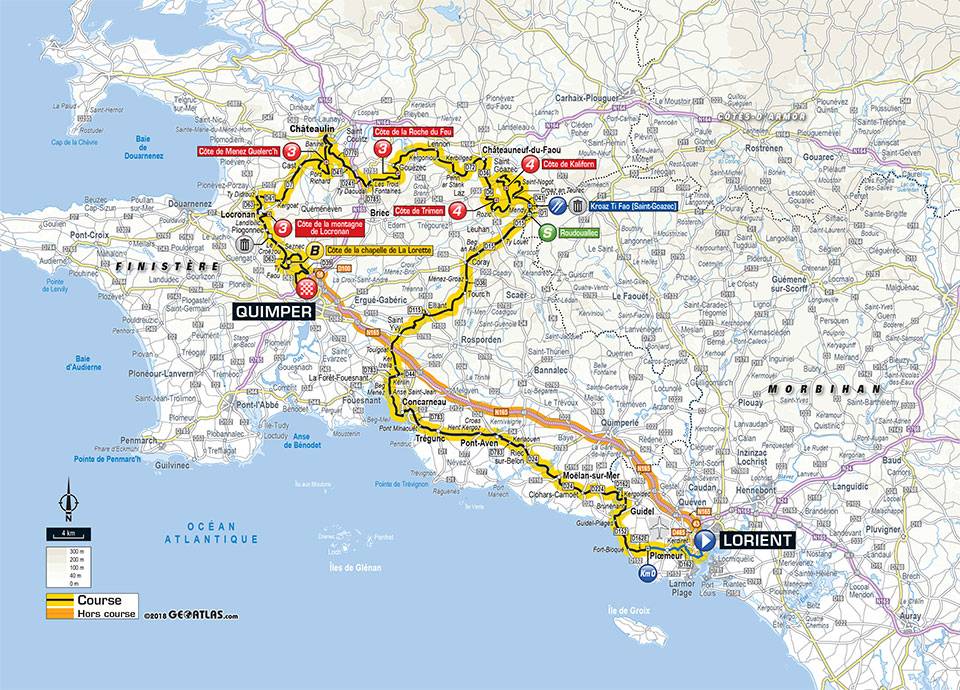 I include the profile, and not only the map for this stage. 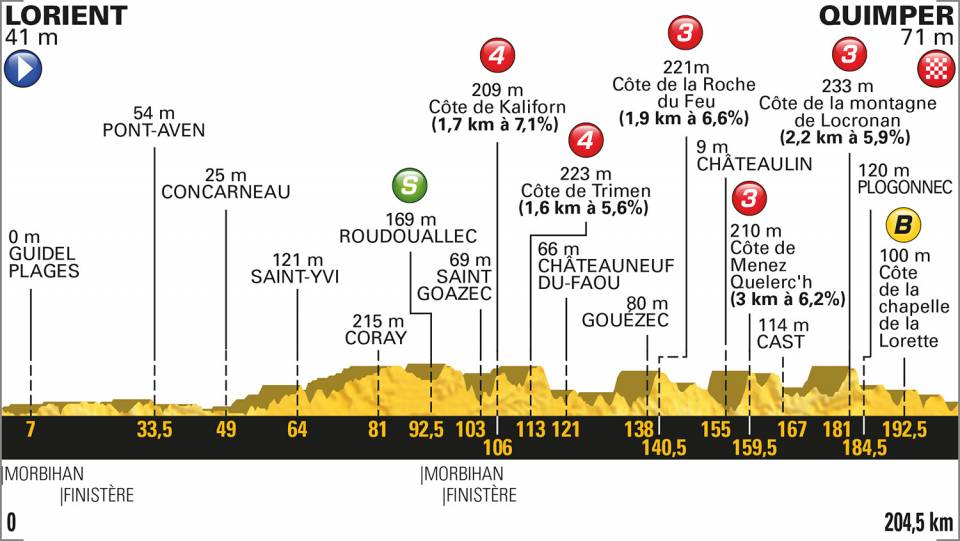 I will make a detour into the geology of this area. Brittany is to a large exstent mountain, or at least solid rock – whatever you prefer to call it. There are no high mountains. But a lot of hills going east-west. 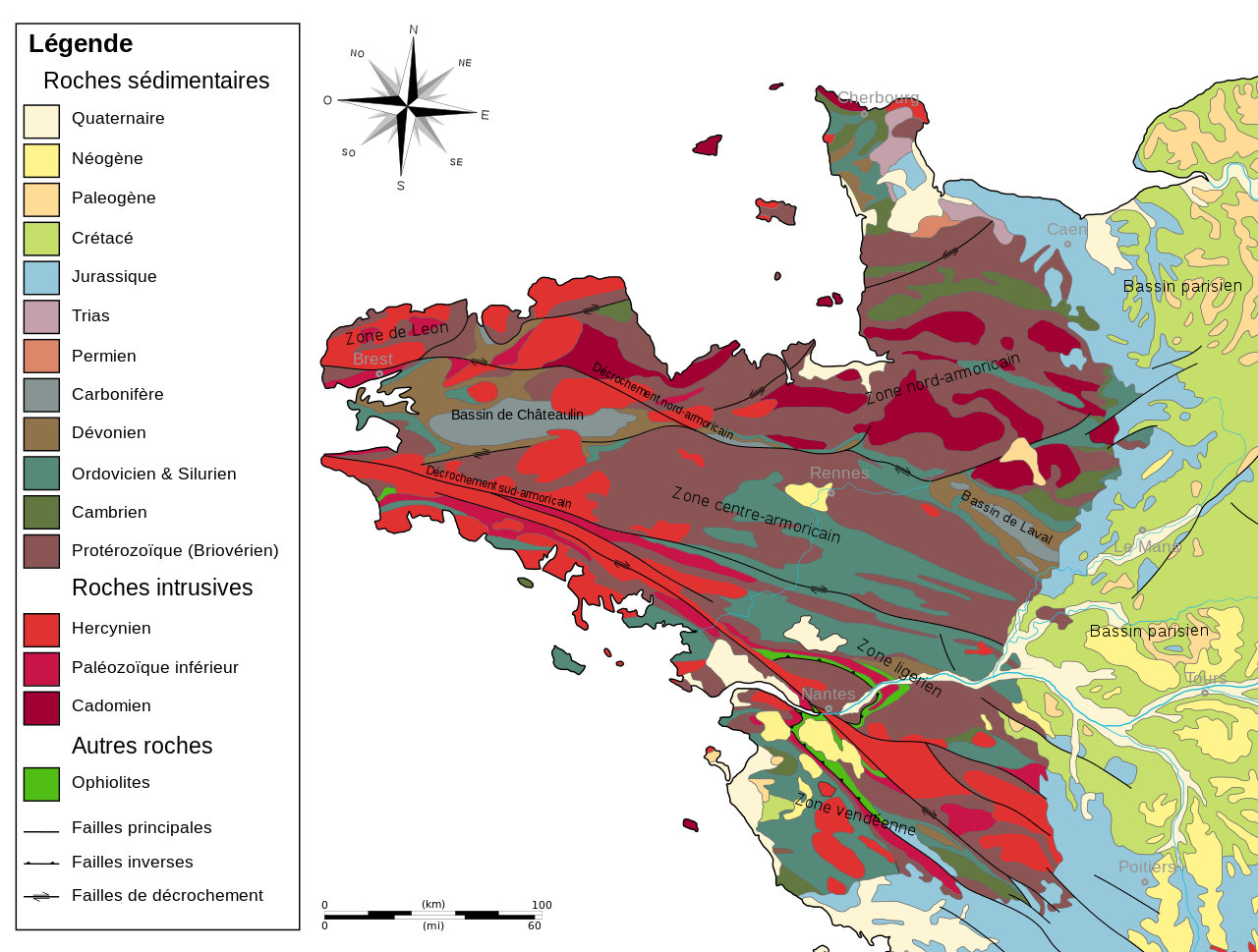 For those who may be interested in such information, the Armorique massif is old rock. It was an area that was squeezed between what is called  Gondwana (Africa, South-America etc) and Laurussia (Euramerica) 3–400 millions years ago. But it will be going too far to say that the breton’s urge for independene is rooted 3–400 mill years back in time, when the area was a continent on its own.

If this stage had come a week or two later, I would have said that is would be a stage where a breakaway could go to the finish. But early in the tour, the teams of the GC-contenders will not let them go, at least not win much time.

There are a few points for for the polka dot jersey on this stage, more than on the previous stages combined. The jersey may shift shoulders, but it will not be here that this competition will be decided. But there are both money and prestige for he who gets the jersey after this stage.

A tyipical drink from Brittany is cider, made from apples. I have tried several times to learn to like cider. But without success. Cider is not my drink. At breton restaurants cider is often the drink that is included in the set menues, often served in ceramic cups.

Cider is fermented apple juice. It can be weet (Cidre Doux), semin dry (Demi-Sec) or dry (Cidre Brut). It is usually fairly low on alcohol, usually 3-5%. I have several times bought some bottles of cider when Tour de France is in Brittany, as an attempt to aquire the taste. The was a breton shop in Paris, where I used to buy various types, but it has disappeard. I go back to some of the notes from previous years.

One cider was a Blanc de Pommes from Vallée de la Seiche. It is a light cider, made from one type of apple. It is fruity, with a light acidity and has 4% alcohol. The producer recommend this one for Kir Bretonne (Crène de Cassis and cider).

The next one is a Fermier Cidre de Bretagne, made by Bertrand Abraham. When something is labeled fermier, it means that it is made at the farm.  It is, as far as I know, a rahter small producer.

I third one I bought was Cidre de Fouesnant from Manoir de Kinkiz. This is the most traditional, and not a cider everyone likes, even among those who like cider. This is a rather colourful descripteion I found at ratebeer.com:

“Aroma of old 1950’s linoleum tile, fresh apples, dirty socks; like I just walked into an old farmer’s home to sit at the table and hear his story. I can smell his flannel shirt, the duck in the oven, the fresh vegetables. Taste is very earthy — fermented apple, cheese, sour apple skins. Wet finish. This is an exceptional cider, way outside the norm, but fascinating to taste. There’s something new in every sip.”

There is also cider made from pears. The producer Vallée de la Seiche (who also produces this type of cider), says that it is a misuse of the language to call this « cidre de poires ». They simply call their drink La Poire. It is said to be good for a Kir, and that the ladies like it — still according to the producer. I have tasted cider, or whatever you will call it, made from pears. But it is too sweet to my taste

At breton restaurants they ofte serve galettes, unsweetened pancackes made with  buckwheat, or blé noir, as it is in French.  It grows well on low-fertility or acidic soils that is well drained. And as some bretons say: They have more than enough of bad soil and rain, which is why it is much grown there.

Galette is often served with ham, mushrom, cheese or something else. And you can round of the meal with a sweet pancake (crêpe). I often eat galette at breton restaurants, usually for lunch. But I prefer beer over cider to go with them.

I Brittany they have their type of the viking drink, mead,  which they call chouchen. It is made from honey and water, that is fermented.

Where they make alcoholic drinks, they will usually distill some of it. They make apple brandy in Brittany, but we leave apple brandy until we get to Normandy and Calvados.

They also make a pear brandy, and according to the bretons it is more original than Poire WIlliam, whatever that should mean. But no matter who started to make this kind of pear brandy, I like it. And I like the concept or image of a bottle put over the embryo of the pear (I do not know the word in english), where the pear grows and ripnes inside the bottle. I have also seen some where the a pear is put in a bottle with an open bottom, where the bottom is glues in afterwards. This is a kind of cheating, and not the real thing.

One thought on “Wines and other drinks of Tour de France 2018. Stage 5: Lorient — Quimper”