As expected, a new sprint. And peter Sagan was up there again, with enough bonus seconds and points to take both the yellow and the green jersey. Sylvan Chavanel got the prize for the most combattitive rider. This is the prize they get when they have worked and tried hard, without achieving anything. But Sylvan Chavanel is now riding hisTour de France no 19, which is a record and really an achievement.

Stage 3 is a 35,5 km team time trial. I like team time trials. At Tour de France 2009, I had the privilege of following the team time trial from the studio/production area in the TV compund. I had their reporter and former pro cyclist and TdF stage winner, Dag Otto Lauritzen, as a personal expert commentator while we were watching. I learned a lot about team time trial this time, and to me it is a fascinating type of cycling. Here the teams really have to work as teams. Some teams are training seriously for team time trials, others are not. It makes a difference, and there can be interesting time differences after this stage. 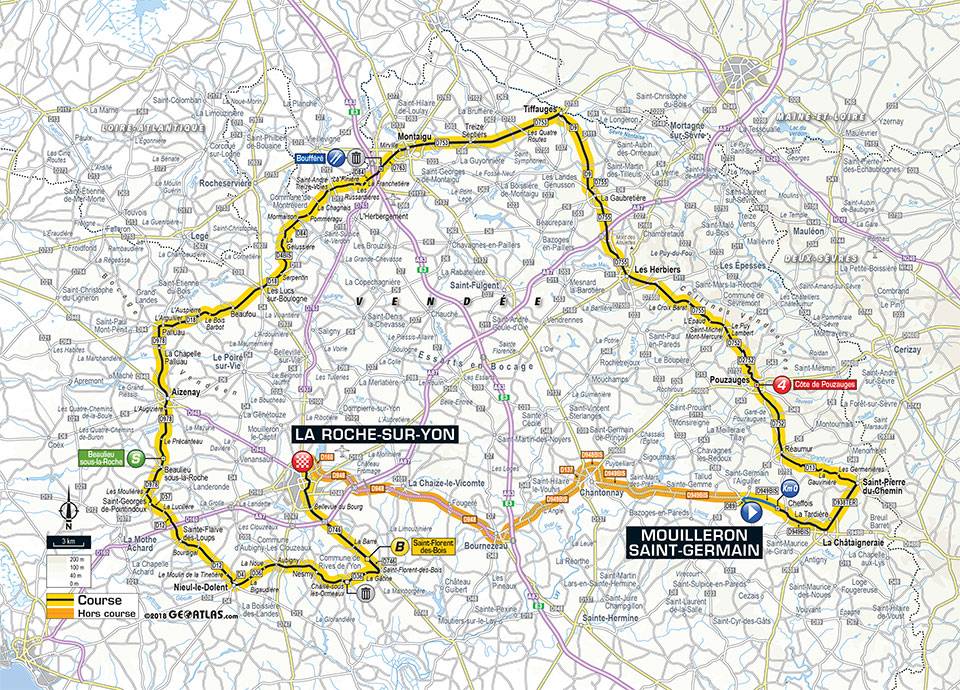 We are still in the same area, and we have harvested most of the wines we can find here. We have to move a bit further into the country, to the neighbouring region Anjou

A grape that is at its best in Anjou is the white/green chenin blanc In a rather small area west of Angers, Savennieres (wtih the two subdistricts Coulee de Serrant and La Roche aux Moines) they produce some of the world’s best dry chenin blanc wines.

Chenin blanc is a grape that can also give an excellent sweet wine. They are among the best sweet, white wines, even though not as famous a Sauternes. The best wines come from Coteaux de Layon and particularly the small classified subregions Quarts de Chaume and Bonnezeaux. They have a floral aroma with a touch of honey.

If we choose a dry chenin blanc for the starter and a sweet chenin blanc with the dessert, we can have a red made from cabernet franc form the Anjou Village appelation. It is a red with a slightly spicy character. The best ar from the area around Brissac.

When I was young, I used from time to time to drink the rosé Cabernet d’Anjou, made from cabernet franc. There is also a rosé labeled Rosé d’Anjou, made from a for me unknown grape called grolleau. Last time Tour de France was in this area, I bought a bottle of Cabernet d’Anjou, to retaste it. To be honest, it was not a very pleasant revival of may youth. It is a semi-dry rosé. I used to drink a lot of semi-dry wines when I was young, also a lot of German riesling and some other semi-dry German whites. Today I want my wines dry, or really sweet to dessert. I rarely drink semi-dry wines (event though a semi-dry white is one of the few wines that can match spicy food). I will probably not buy another semi-dry rosé from Anjou.

I have written a few times that I am not pretending to be an expert. It is more of an invitation to join me in my learning. Loire is one of the regions I have discovered when I have been searching for wine along the Tour de France stages. Loire is an exiting wine region, or maybe we should say wine regions, and a lot more than Sancerre, Muscadet and the Cabernet d’Anjou I was drinking when I was young.

Add that it is a beautiful area, with many chateaus worth visiting.