Her we go again. We can let football be football. Now it is time for Tour de France. Stage 1 starts at Noirmoutier-en-l’Île and the riders will pass Passage du Gois before getting to the mainland.

Passage du Gois is a 4,5 km passage to the mainland, that is flooded tice a dav, on high tide. One has to be aware of the tide and the time when passing. 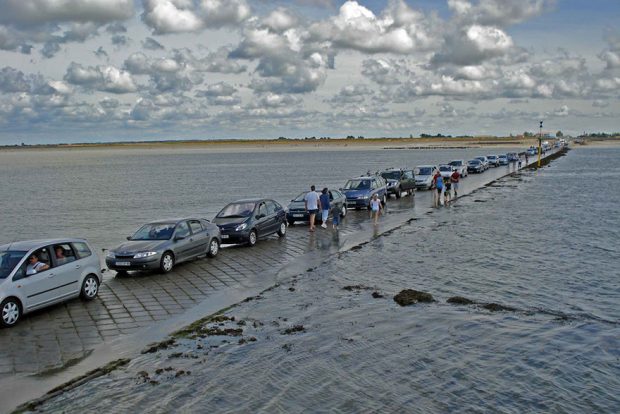 We must assume that they studied the tide table before deciding to include this in the race. Even when the road is not flooded, it can be slippery. It was used for the first time in Tour de France in 1999. Slippery road lead to falls, and the peloton was splitted with a 6 minutes time difference.

It was used again as opening stage in 2011. There is another connection to the mainland, so people can get to and from also at high tide. But this connection is not as interesting and spectacular.

The stage is flat, and it will probably end in a sprint. There is one 4th category climb a 173 km, just enough that someone can get the polka dot jersey. But on a stage like this, it can always be a question of who will be in the position to sprint at the final. The stage follows the coast, meaning that wind can play a role. But the weather forcast says nice weather and only light winds.

When the riders get to the mainland, they will turn south towards  Saint-Gilles-Croix-de-Vie before turning east and into the area Fiefs-Vendéens-Mareuil. The stage ends in Fontenay le Comte. We will visit several wine areas. But from a wine perspective, it is a soft start. We are a bit south of the river Loire. We are not very far from Cognac. But I do not think we shall go there yet. Cognac is not very goos as an aperitif, and we are only at the aperitif now.

I find it misleading to call Loire one wine region. The various areas do not have more in common than that they are located near the same river, the longest river in France. We could mention other “wine rivers”. Bordeaux is located where the rivers Garonne (and Dordogne) flows into the ocean. Along the river Garonne we find many wine districts lik Duras, Marmandais, Buzet, Côtes-du-Brulhois, Fronton, Lavilledieu anf St-Sardos. But we do not label all these wines “Garonne wines”.  Alsace is located by the Rhine river, but we to not call Alsace wines Rhine wines. Etc.

I find it difficult, or almost impossible to find what could be called a Loire style. We are now at the Atlantic coast, with costal climate. At Sancerre ande Poully Fumé, there is continental climate. There are major differences.