When Simon Yates was out of the competition for the GC, Mikel Nieve took the opportunity and got a stage wine on his 34 years birthday. A rider can probably not get a better birthday present. But even if Simon Yates did not last to the finish, the team got five stage wins and a number of days in the pink jersey (I have not counted). This is not a bad outcome for Mitchelton-Scott.

Yesterday it was Thibaut Pinot who got “the hammer”. It was painful to see how he suffered in the climbs. He eventually finished in the grupetto, with the looser from the day before, Simon Yates, 45 min and 32 seconds behind Mikael Nieve. For them it is only a question of hanging on to the finish line in Rome.

Chris Froome was able to maintain his lead. Tom Dumoulin tried and did what he could. But he did not have what was needed to beat Chris Froome yesterday.

Today it is a stage of honour, or stage of charm if I translate directly from the expression in Norwegian. I do not know the  Engilsh expression for this, if it is one. It is not the same tradition in Giro d’Italia as in Tour de France. It has often been an individual time trial as the final stage, that has often been decisive. This year it is a round of 11,5 km in Rome, that they shall cycle ten times. Independent of any tradition, this is a flat stage. I breakaway will not be allowed to go. The GC is settled, it is only a question of which sprinter will win the stage.

An old Roman is getting ready for the final. 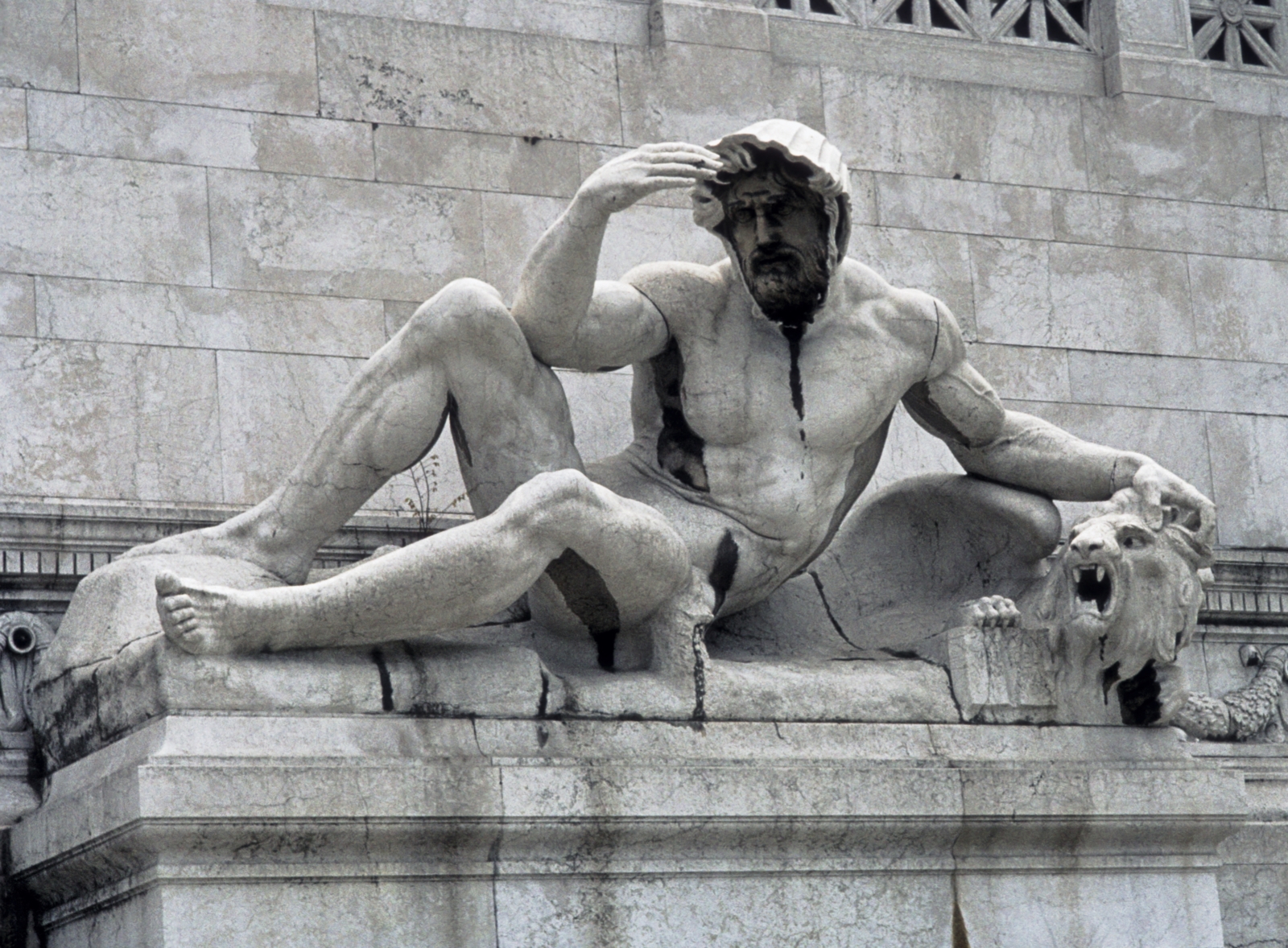 Rome is in the region Lazio. From a wine perspective, it is not the most exciting region. I allow myself to sidestep a bit here, before coming back to the wine. What we often think of as “Italian kitchen” is often a kind of Italian tourist kitchen, often found in resturants outside Italy. In Italy there are huge regional differences, based not the least on different raw materials. You do not get the same “Italian” food in a fishing town in southern Italy, as you will get in the foohills of the mountains in the north.

One time, when I was at a meeting in Rome, our host, a real Roman, wanted to have us served roman food, and demontrate that this was something very different from the “Italian” kitchen we were used to. He took us to a restaurant serving roman food. I do not remember the name of the restaurant. He ordered many starters, for us to share — so we could taste som real roman, or maybe lazian (?) food. We got a lot of offal, like minced lungs, trippa (cow stomach), etc. In my opinion, it is a kind of food that it insteresting to have tasted once, to tick it off on the list of “I have tasted that, I do not have to have it again”. The food was intersting, but not good. I do not remember what we got as main courses. It was probably less interesting, but much better.

Back to the wine. One of the more well known wines from Lazio is “Est! Est! Est!”. It is more known for the story and the name, than for the content of the bottles. Bishop Johan Függer was in 1111 on his way to Herny Vs coronation i Rome. He sent his servant in advance, to find inns along the way with good wines. He should write “Est!” on the doors of inns with good wine, meaning “vinum bonum est”, or “here it is good wine”. When he arrived at one inn in Montefiascone, he got so excited about the wine that he wrote “Est! Est! Est!” There are many versions of the story, and in some of them, the bishop never made it to Rome. He remained at the inn with the good wine. It is uncertain if this is true or not, but it has been good marketing for the wine.

The wine is not very interesting. It is a white wine, mainly made from Trebbiano toscano, with some malvesa and trebbiano giallo. But we do not know how the medieval wines were. The wine at this inn may have been far better than the alternatives, even if it should not be a very good wine but our standards. The “Est! Est! Est!” that we can buy today, is probably much better than the wine the bishop got, anyway, Falesco is known as a good producers, it you will try the wine,

The district that has mainly served Rome with wine is Frascati. The wine district starts right outside the ring road around Rome. Italians have always prefered and been proud of local products. The proximity to Rome put the distict under pressure from developers. A lot of the land are bought to make expensive housing, and the vinyards are diminishing.

They produce a lot of uninteresting “terrace wine” in Frescati. But some producers are working hard to imprve the quality. But the same producer may have som indifferent wines and some very good wines, meaning that one cannot just go for the producers. Some good wines are Frascati Santa Terasa from Fontana Candida, Racemo from Cantina san Maroc and L’oviella, Castel de Paolis, Rumon from Cantina Conte Zandotti, and the wines  Villa dei Preti and Vigneto Filonardo from Villa Simone.

It is tempting so say: When in Rome, do as the Romans, or drink wines from Lazio if you are in Rome. But they are not wines to look for if you are far away. I have followed my own advice, and have set aside a bottle of franciacorta for the final. But I was not able to get a rosé.

Here some fighter planes are marking the finish, by polluting even more than these planes usually do. 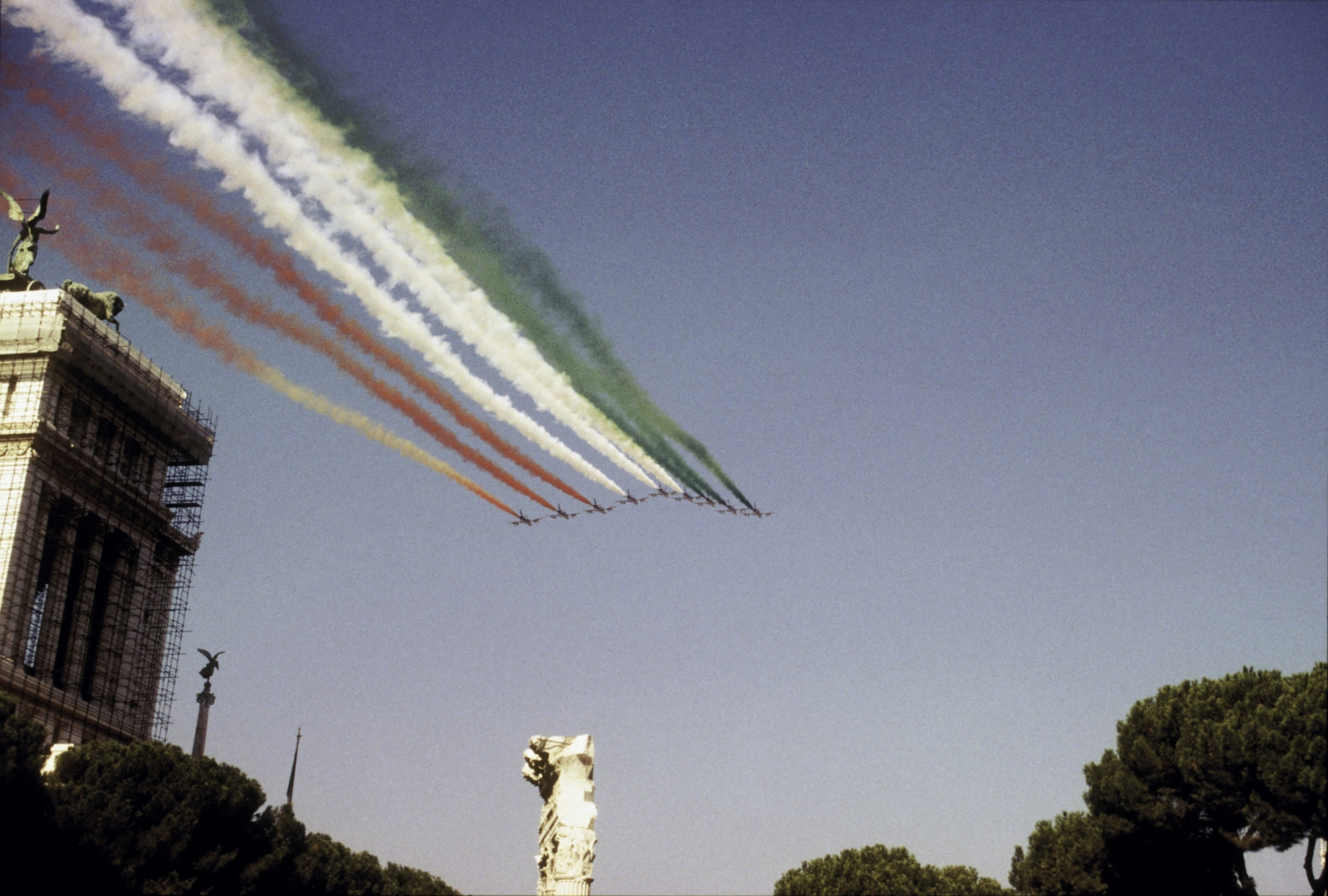 The Giro is over for this year. Because of some football matches, Tour de France starts one week later than usual this year, July 7. This will give Chris Froome one more week to recover, before he will try to win the double. I think his ambition is to win a triple, by winning Vuelta a España too. We will se what he can achieve. We will meet in Vendée for Tour de France in July. It is time to say good bye, and what can be more appropriate than this: