I was traveling most of the day yesterday, and arrived home late. Even later than planned, due to air traffic contol strike in France. And when you have been away for sometime, there are alwas things that need to be taken care of before we can do the more fun stuff, like cycling and wine. So I am a bit behid.

The time trial Tuesday did not shake up the standings, and today was a sprit stage, as expected. 78 riders got the same time. 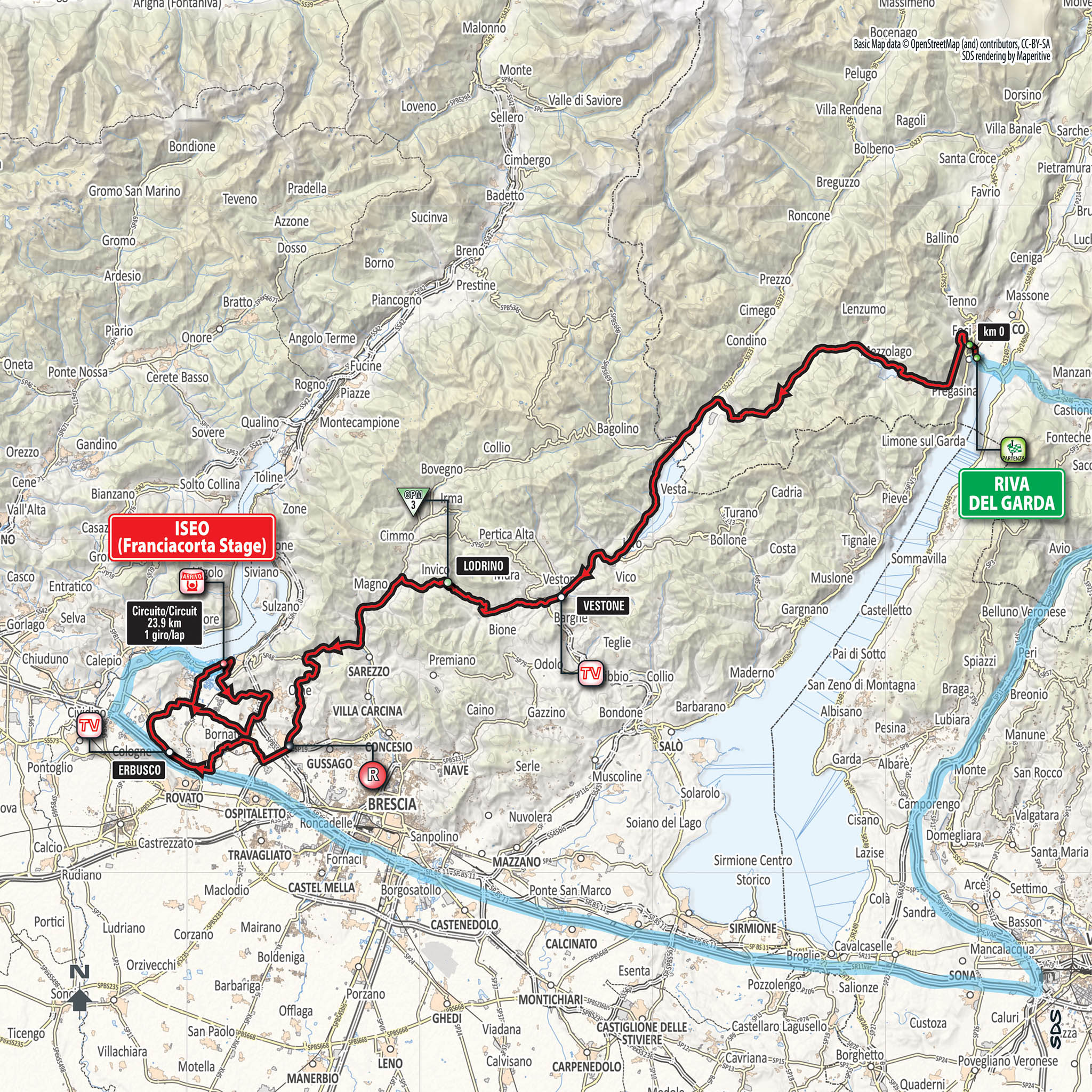 The organisers have given this stage the name Franciacorta stage. Yesterday I wrote that we in Trento DOC find the second best sparkling wines in Italy. Here in Franciacorta, it is simply the best. Decanter calles Franciacorta “one of Italy’s best kept sparkling wine secrets“.  t should not be a secret. Franciacorta is the only sprkling wine that can compete with champagne in quality, but it is far behind in prestige and market recognition. If you want to show that you are a connoisseur , and mayby a bit snobbish, you serve franciacora the next time you are thinking of serving champagne. I have not yet tasted a franciacorta that can match the best champagnes. But I have not spent as much time and money on franciacorta as I have done on champagne, and I have probably not tasted the top franciacortas.

Franciacorta can be made from the two “champagne grapes” Chardonnay and Pinot Noir, with addition of Pinot Bianco. Franciacorta is made with traditional method. They first make a still wine, which is stored at the lees, befor the second fermentation in the bottle.

There are five quality designations of franciacorta.

Franciacorta NV. A non-vintage wine which must be released no earlier than 25 months after harvest, with a minimum of 18 months on its lees.

Franciacorta Satèn. A blanc de blancs version that must have a minimum 50% Chardonnay, combined with up to 50% Pinot Blanc. The pressure is lowered to under 5 atmospheres for a gentler, crémant-like sparkle. It must be aged for at least 24 months on its lees.

Franciacorta Rosé. Must have at least 25% Pinot Noir in the base wine and spend a minimum of 24 months on its lees. I have to admit that I am not sure how the rosé is made. Usually rosé sparkling wines are maded as white wines, with some red wine added. Some, but not many are made as rosé is made: The skins are ncluded in the first part of the fermentation of red/black grape. I usually find these rosé sparkling wines better.

Millesimato. The product of a single vintage, which must be aged for a minimum of 30 months on its lees and cannot be released until at least 37 months after harvest.

Riserva. The pinnacle of the Franciacorta pyramid. Requires at least 60 months ageing on its lees.

It is late in the day, and probably too late to recommend a wine for today’s stage. But the final is in Rome. Rome is in Lazio, which is not a very interesting wine region. Get a bottle of franciacorta, and keep it for the final. Pink is the colour of Giro d’Italia, so a rosé franciacorta should be a good choice.