Saturday, it looked as if Chris Froom had cycled himself in form, and could still be a cotender to win Giro d’Italia. Sunday we saw another Chris Froom. He did not follow Simon Yates in his brave attacks But it was more serious and a clear sign of weakness that he was dropped by the second chasing group, in which he was riding for a while. Now the time gap is starting to get too big. The stage was a demontration of power from Simon Yates.

The grand tours are won (or lost) in the mountains and the time trials. The sprinters may win stages, but they will never gain enough time to win the race. Sometimes, when the positions in the race are more or less settled, they will let a breakaway go in, as long as there are no riders who are any threats to those who are fighting for overall position, be it in the GC, point, youth or KOM, in the breakaway. The teams will not use energy to chase these breakaways, and will let one of the domestics shine and win a stage. But they should have learned not to give them a too long lead, as they did on stage 13 in Tour de France 2006. The breakaway got a lead of almost 30 minutes on the peloton. The stage was won by Jens Voigt, with Óscar Pereiro Sío second. Óscar Pereiro Sío got the yellow jersey. When Floyd Landis tested positive on doping and was disqualfied, none of the other riders manages to take back the lead from Óscar Pereiro Sío, and he won the tour this year.

Those who are competing for the GC, or the best young rider, will go all in on a time trial, to win or at least not to loose time. Then there are som TT-specialists, who are competing for a stage win. But the sprinters and all the domestics have nothing to fight for in an individual time trial. There are no points to be won for the sprinters, and the domestics cannot help their captains. Their job is to save as much energi they can for the stages to come, and finish within the time limit. Jens Voigt once called these individual tme trials well into a grand tour as a “semi restday”.

Todays tme trial is 34,2 km and flat. Both Simon Yaes and Tom Dumoulin are good time trialer (I am not so sure about Simon Yates, but he dd well in the prolog). A Chris Froom at his best coul probably not win enough time on a stage like this, to catch up with the leaders.

It is the first day after a rest day, after two weeks of cycling The riders react differently to this. Some are recharged and fit for fight, others may need a day or to to get back into the race. 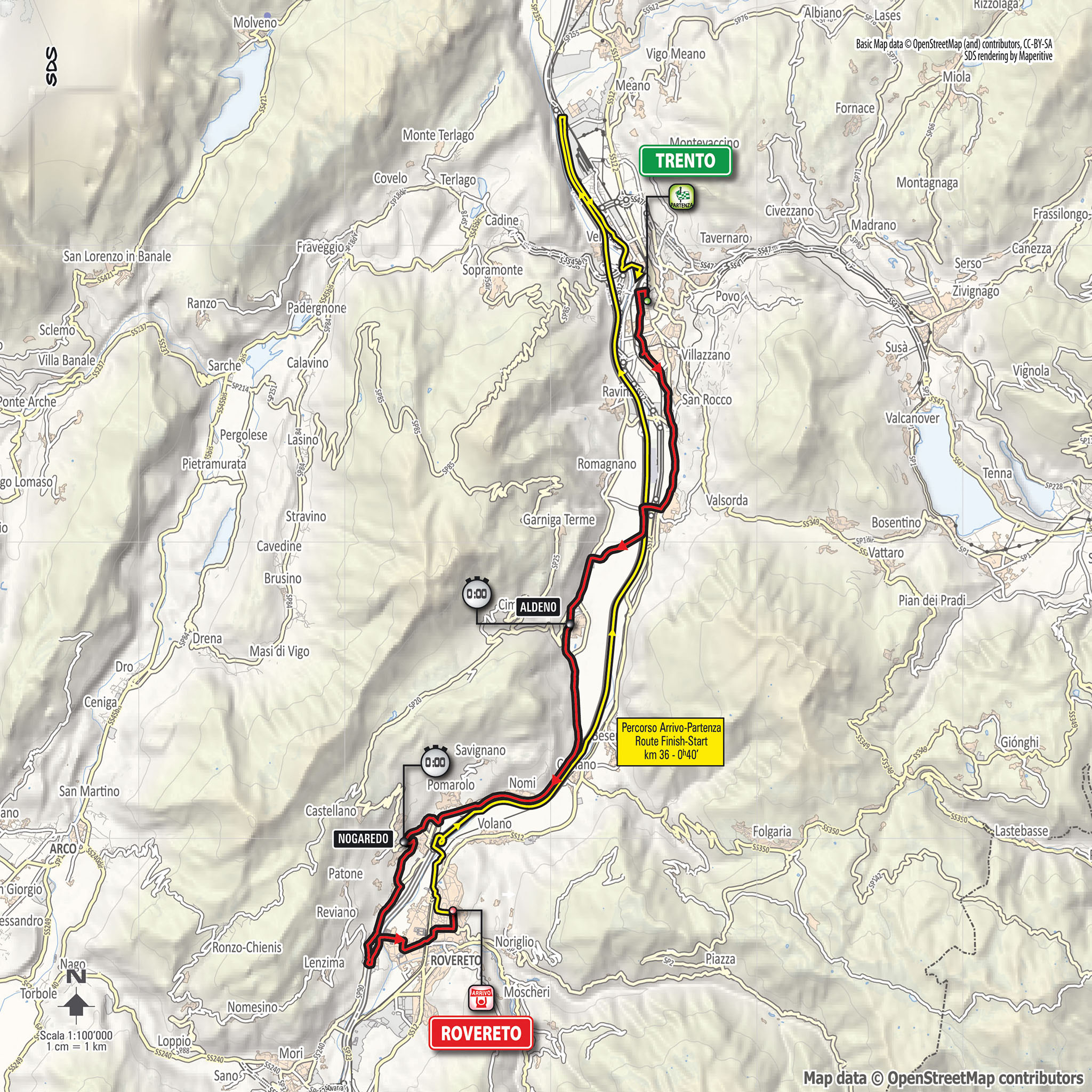 The stage starts in Trento and ends in Rovereto. We are in the region Trentino — Alto Adige. It is in practice two autonomous regions. The mainly German speaking Province of Bolzano, called Süd Tirol in German, and the Italian speking Province of Trento, often called Trentino in the south.

The river Adige is the second longest in Italy, after Po. A little south of Bolzano, the river Eisack (Isarco in Italian) flows into Adige. They form a Y, with Bolzano almost at the spilt-point. We are in the stem, if we can use this metaphor.

We are in Trentino, and will leave Alto Adige alone this time. There are many overlapping classifed areas here.

Trentino DOC is an “umbrella” classification, including almost all of Trentino. Within this we find Trento DOC, and many other classifed sub areas. We will come bach to some of them.

WIthin Trentino, we can distnguish between three main caegories of wine:

Vin Santo is a sweet wine made from the local grape Noisola. It can be worth looking for. But the producton area for Trentino Vin Santo is small, only 6 ha. It is not easy to fnd this wine. The other wines in the category Tretino + type are not noticable.

We can also include the area Sorni, where they produce Sorni Bianco and Sorni Rosso. The cooperative La Vis is dominating. The last area is Teroldego Rotaliano. The wines can be anything from light and uninteresting, to powerul, concentrated and dark Foradori* seems to be the leading producer. Teroldego is an itersting grape that can give a good and complex wine if the yield is limited — which is not always the case. Teroldego was a totally unknow grape for me until a few years ago, when I had to find a wine to a stage in this area. This is what makes it interesting and fun to write this. I get to know many to me unknown and often good grapes and wine regions. As I have said a few times: I am not pretending to be an expert, you are just invited along in the learning process.

The house Ferrari has been instrumental in developing this wine. The founder, Giulio Ferrari, had studied wine production in Champagne, and it is obvious that he had learned something that he took home.

They may use the grapes Chardonnay, Pinot Bianco, Pinot Nero ande Pinot Meunier, the three grapes used in Champagne, with the addtion of Pinot Bianco. Chardonnay is the dominating grape.

I will say that here they produce Italy’s second best sparkling wine. We will come to the best to a later stage.

The wine for this stage could be a sparkling wine from Trento.