Another flat stage. There is a category 4 climb 20 km before the finish, but it will not cause any problems. This will also be a stage for the sprinters. But tomorrow, there are really hard mountains. Today may be the day some sprinters and other rinders will feel some old injuries, or maybye they are beginning to get a cold? Or another excuse to leave the Giro before the really hard moutains the last week. 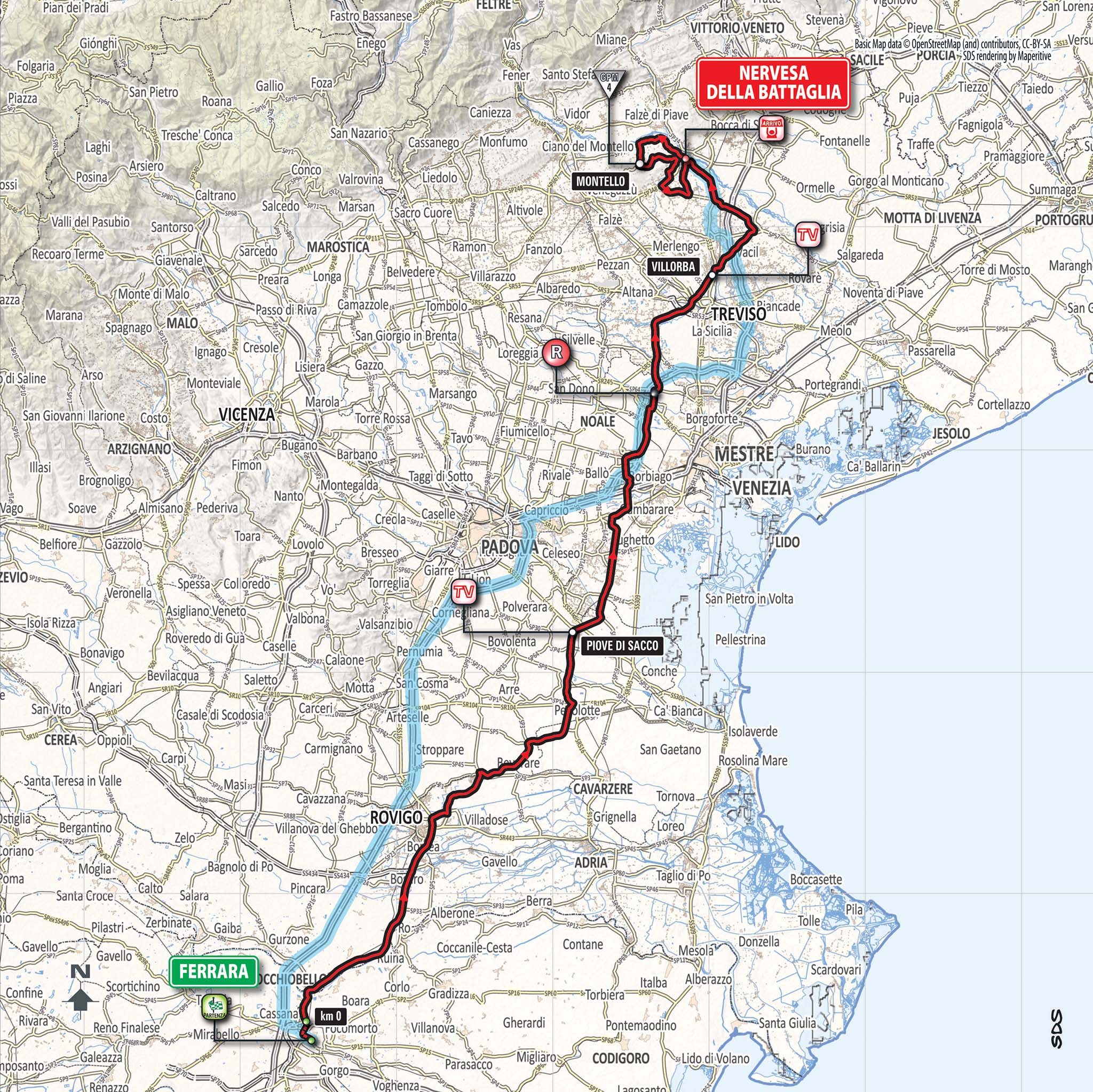 We start inn Ferrara, which is said to be the first planned city.

Ercole I d’Estewas count of Ferrara from 1471 to 1505. In 1484, he asked tha architect  Biagio Rossetti to make a materplan or the expansion of the city. Ferara is an almost intact mediavl and rennaisance city, listed on UNESCO’s World Heritage list. 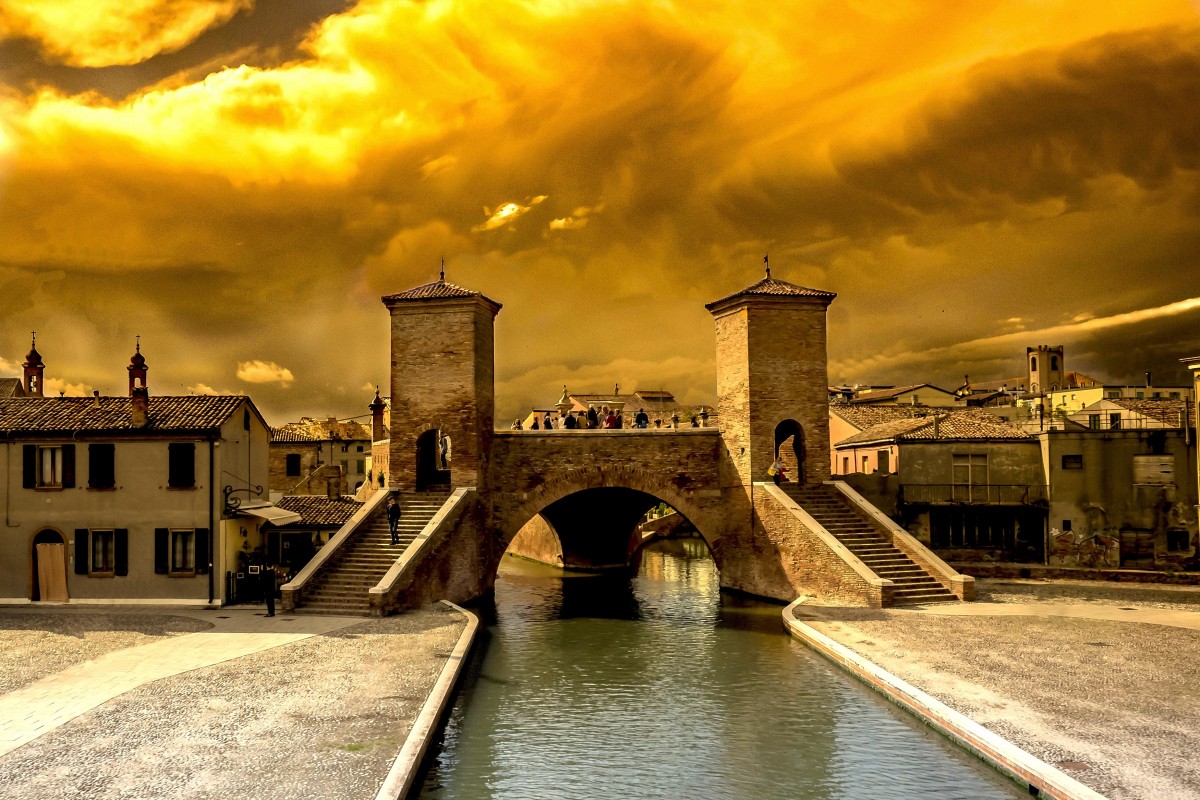 It has sometimes struck me, as something that must be frustration and depressing for urban planners, that what we often like in old cities, was never really planned.

Some of us also think of Ferrara as the city where Mozart’s opera “Cosi fan Tutte” takes place Cosi fan tutte means something like so does everyone. Here it means that no women are faithful, and in particular no women from Ferrara.

The opera has a libretto, which means little book, but now means the text of an opera, by Lorenzo da Ponte, who also wrote the libretti to “The Marriage of Figaro” and “Don Giovanni”, two operas I prefer over “Cosi fan Tutte”.

The story in the opera is a classic comedia del arte story. The old Don Alfonso says to the two men Ferrando and Guglielmo that there are no such thing as a faithful woman, including thei fiancees Dorabella and Fiordiligi. Columbina is a classic comedia del arte character, a savy, street smart ordinary person, often a servant, here represeted by the maid Despina. They will put the girls to a test, Ferrando and Guglielmo pretend that they are called to military service, and have to leave imideatly. They move, but return in disguise. Each of them shall try to seduce the other man’s fiance, and the game is on.

It does not reallly sound like a drama of Shakespeare or Ibsen. But we find the same story in Boccacio’s “Decamerones”, and in Shakespeare’s “Cymberine”, and part of it in “The Taming of the Shrew”. So it may be a bit Shakesperian anyhow? But Ibsen? He did not write any comedies.

No one could like Mozart give life and character to a person through the music. In this opera, he is at his best just when Ferrando and Guglielmo goes from playing a game staged by Don Alfonso and Despina, to really wanting to seduce the other’s finace, still believing that their owen fiance will resist the temptation and remain faithful.

Many people know Mozarts lifte from Milos Forman’s movie “Amadeus”, by the way Mozart never used this name. In this movie, Antonio Salieri is revived, in a not very honorable way. But it is not true that Salieri tried to poison Mozart. But Salieri started to set da Pontes libretto to music, but did not finish. Then Mozart got the libretto.

But that was a side step. As I wrote yesterday, the Po-delta is not the place for good wine. But we can make a cheap point by mentioning the DOCG-classified white wine from the area a bit south of Ferrara, Albana di Romagna . The classification is controversial. Many says that the quality is not good enough for a DOCG-classification.  It is made from the grape Albana, and when Ferrando and Guglielmo return to their fiances i Ferrara, they are discuised as Albanians.

As I said yesterday, yesterday was the National day in Norway. But we can still have something sparkling, but not at the same level we should have to celebrate a national day.

Today we go for the popular an fashionable wine Prosecco. We usually think of Prosecco as a type of wine. But it is a grape. It ripens late, and has an aroma with flowers, apples and pears. It has high acidity, which makes it suitable for sparkling wines. Today’s stage ends in the heartland of Prosecco.

Some basics about sparkling wines. Sparkling wines started as accidents. When the ferentations had stopped and thewine was finished in the automn, it was bottled. But it could have been the cool temperature that stopped the fermentation when tere was stil some sugar left. When it got warmer in the spring, the fermentation started over in some bottles, creating pressures in the bottles that they were not made for. Corks sprung and bottes exploded.

Sparkling wines are usually produced as still wines. Then it will undergo a second fermentation in a closed container, so that the cabondioxid does not escape and is aborbed in the wine. In Champagne, these still wines can be stored for years. The champagne houses will blend, often from different vintages, to make their cuvées.

In the traditional method, the closed container is a bottle. A mix of the still wine, sugar and selcted yeasts are added. When the fermentation is finished, the bottles are slowly turned upside down, so that all the sediments from the fermentation will sink to the cork. The top of the bottle is frozen, the cork opened and this frozen piece of sediments are taken out, a little wine is added, and it is recorked.

An even cheaper method is carbonation, which is adding carbonated gas under pressure, the way lemonades and sodas are made. A friend of mine and I once tried to make a sparkling wine out of red wine this way. We had a huge CO2-bottle for industraial use, and we set our open bottle of red wine under pressure. We got a lot of bubbes, but it did not taste any good.

The Italians did not take any steps to protect Prosecco before it had become very popular. But they had a problem: Prosecco was a grape, and anyone could make a wine from the grape and put Prosecco on the label.  To designate a protected area, they needed to have a geographical area.

The Ialians founs a creative solution. There is a little village close to Trieste, called Prosecco. It is the one written with red letters on the map below. They defined a production area based on this village. The village Prosecco is located a long way to the east of the traditional production area for prosecco. It meant a large expansion of the productoin area. Traditionally, prosecco has been produced in Veneto, where today’s stage ends. But now it includes four areas in Fruili Venezia Gulio: Gorizia, Pordenone, Trieste and Udine, in addition to five areas in Veneto: Treviso, Venice, Vicenza, Padua, Belluno. The production areas for Prosecco DOC is like this: What then happened to the grape prosecco? As we have mentioned a few times, many Italian grapes have various lokal names. They took one of these lokal names, Glera, and renamed the grape. The official name of the grape is now Glera,A not Prosecco. A change in the officia name of the grape will not change people’s habits, at least not imideatly. But if the producer will put the name of the grape on the label, they must now use Glera.

The classical production area for prosecco is around Treviso, the area that i a bit lighter than the rest on the map. Here the wine can be labelled Prosecco di Treviso DOC.

If we move up the hierarchy, we find Prosecco di Conegliano Valdobbiadene DOCG , which I have also seen mentioned as Prosecco di Conegliano Valobbidane Superiore DOCG. And there is Prosecco Colli Asolani DOCG. These are the two darker areas on the map within Treviso. At the top is Superiore di Cartizze DOCG. The name proscco cannot be used for this wie. But I am violating this, sayig that this is the “grand cru” of prosecco.

There has been a lot of changes since this process started in 2009, and the various sources are not consistent As i do not read Italian, I cannot read the offical classification documents. I may be victim to some confusion and misunderstandings.

The expansion of the production area for prosecco meas that there i a large voume of uninteresting prosecci that are easy to drink and easy to forget.