Today is another flat stage for the sprinters. We start where we ended yesterday, and follow the coast. 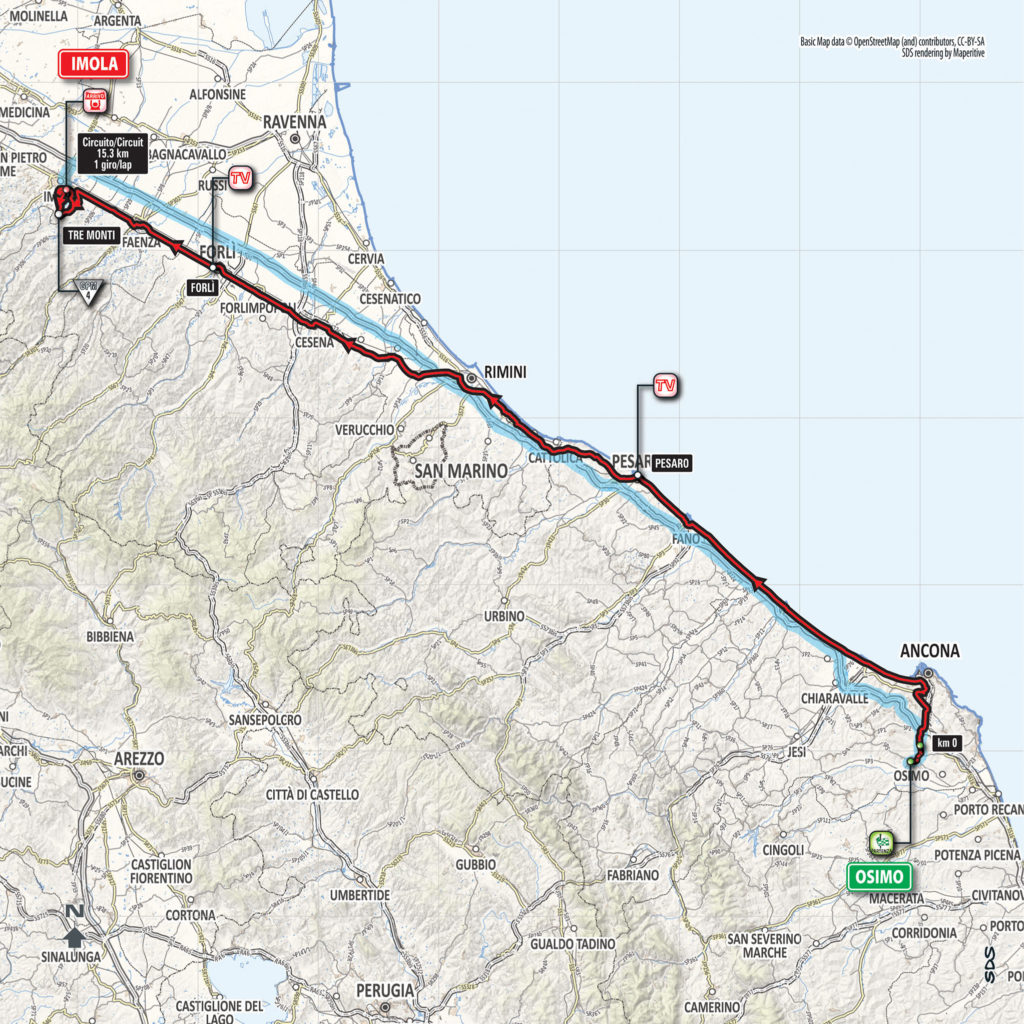 It is some lack of planning on my side this year. I should have left the Cornero-wines around Osimo for today. But what is done is done.

Today, May17., is the National Day in Norway. To celebrate a day like this, we should have a good sparkling wine. They produce spumante many places in Italy, including the Romagna Albana Spumante produced in an area we will be passing near the end of today’s stage. But to be honest, most of these spumantes are not worth drinking. We will leave the better Italian sparkling wines for a later stage. As I am currently in France, it will be champagne for me, anyhow.

For us who were, or still are interested in motor-sport, Imola gives sad memories. It was here the Brasilian Formula-1 driver Ayrton Senna was killed in a crash May 1., 1994.

We start in Marche. Marche is first and foremost known for white wine, made from the grape Verdicchio, a grape rarely grown outside the region.

In 1954, the large producer Fazi Battaglia got designed a special, amphora-like bottle. Other producers followed, and started using the bottle. The bottle was the signature of the wine. A bottle like this may be good for marketing, and it was a success. But it is a dual-edged sword. People remember the bottle, not the wine. In the 1970s and early 1980s, Italian wine was for me Chianti in the “straw bottles”. I remembered the bottles and the name, but not the wine, and maybe most of the Chantis were not very memorable the time — at least not the ones that were within my student budget. When people remember the bottle, not the content, it may be an obstacle to quality deveolpment. It is hard to get rid of the reputation as a cheap, tourist-wine. Now, this bottle is no longer in use.

We have to go a bit in from the coast to find the most well known white wine from Marche, to the area Verdicchio dei Castlli di Jesi, aa bit west of the town Jesi. As the name indicates, it is wine made from the grape Verdichcio. It is regarded as one of the best white wines from Italy.

Piceno covers most of the costal areas in the southern part of Marche. Here they produce Rosso Piceno and Rosso Piceno Superiore, the leading red wine in the area.

I include a gem from Marche. This little story starts at good a fish restaurant in Oslo, that no longer exists. We had an excellent four course fish menu, with a matching wine menu. The sommelier was in good mood, and served a couple of wines in addition to those included in the wine menu. Maybe it was a bonus for arriving late. They probably had open bottles that they could not serve the next day, so why not let some wine interested guests taste some om them? After having been drinking may way along the Tour de France and Giro d’Iatalia stages for some years, I have tasted many wines I probably would not have bought, if I were not searching for wines from a particular area. After first having served a   Recioto di Soave, the sommelier came with a Lacrima Di Morro d’Alba Passito, that she said was from Marche. I looked at the bottle, and objected, saying something like “Alba, that’s in Piemonte, not in Marche.”

Italian wines are exiting, and sometimes confusing. I should have known that you do not object to what a sommelier at a good restaurant is saying. They know what they are doning and they know their wines. On the other hand: If I had not protested, I would probably not have gotten the little lecture about the wine.

Everyone who knows a little bit about Italian wines, knows that Alba is a town in Piemonte, known for Barbera d’Alba and other wines. But there is also a small town in Marche named Alba, where they grow the grape Lacrima and produce the wine Lacrima di Morro d’Alba.

When I came home, I pulled a book on Italian wines out of my book shelf, and read that til is one of the more special Italian wines, that has become more popular over the last few years. It is said to go well with salami and small piglets. Stefano Mancinelli is the main amabssador for these wines. He also makes small amounts of a rare passito, where the grapes have been dried for months before the wine is made. It was one of this rarity we were served. It was very good with the part of the dessert that was made from chocolate. But as the sommlier said: It would have killed the sherbet (which I think was kiwi and banana). We had an excellent meal, a very nice evening. We got a chance to taste som for us unkown wines, and we learned more about Italian wines.

I round off this little story by saying, based on my experince: If you eat at a good restaurant, choose the wine menu that goes with the menu. A glass of wine for each course is a very good concept The sommelier has chosen wines that go well with the food, and you may be in for some pleasant surprises. I have had many intersting, and for me unkwon wines, as part of such wine menus. If they do not have set wine menus, ask the sommelier for advice. It is their profession to choose wines to the meals. They know the food and they know the wines, and they know more than we amateurs will have a chance to learn. If I choose the wines myself, I tend to go fore something safe, something I already know. It is more exciting to get an unknown wine that goes very well with the food.

We end in Emilia-Romagna. This is the Po-valley and the Po-delta, Italy’s most fertile farmland. But good and fertile soil does not give good wine. Grapes that have been forced tu struggle in poor soil and often a difficult climate, give the best wine.

We end not too far from Colli d’Imola, but the wines from this area are not very interesting. Choose a good, white wine from Marche.