As expected: It was a sprint finish. With 81 riders with the same time, there were noe important changes in the GC:

Today is another mountain top finish, but not as hard as the one on Etna. 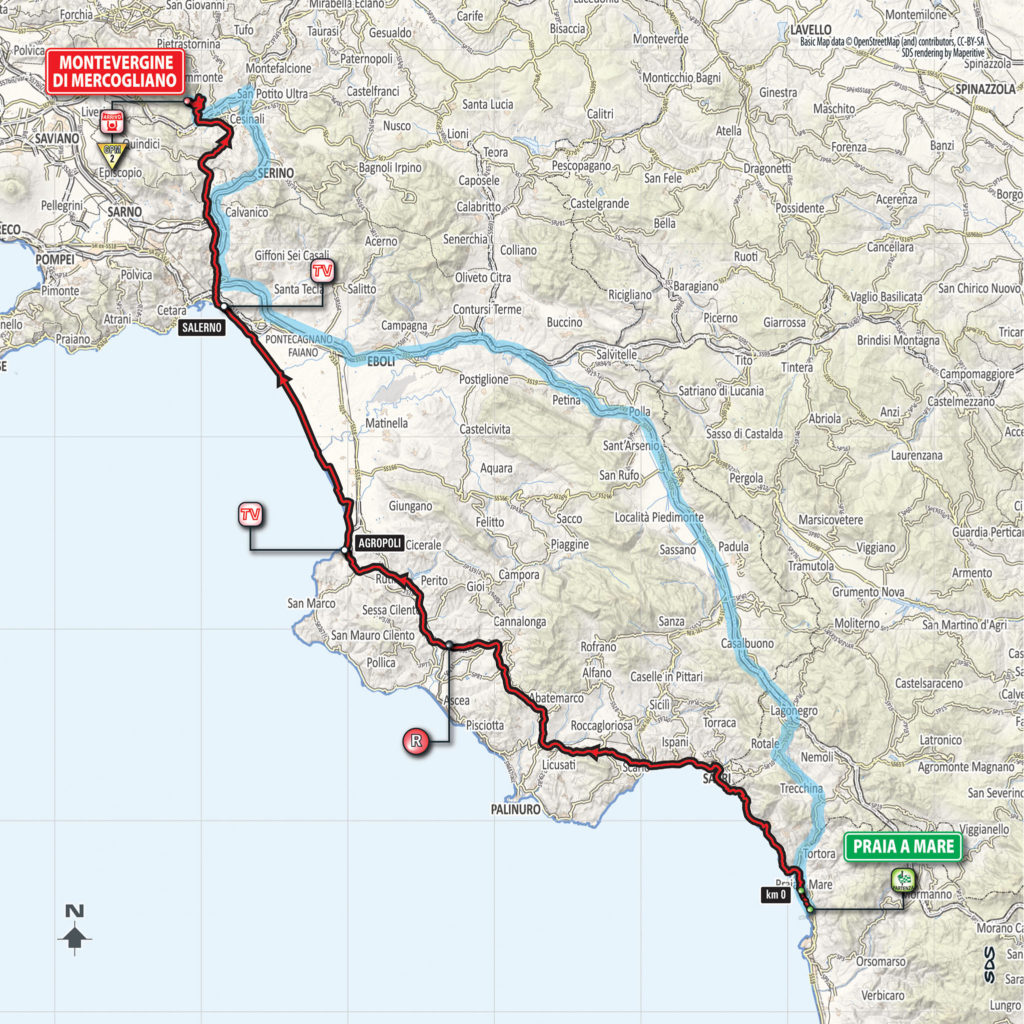 We are now in Campagina. Campagnia means something lik field, land, farmland etc. It is a word we know from champ in Champs Ellysées, Champagne, Campaign, etc. Campaign is originally a military operation to sieze and occupy land, but we will leave the language there.

Campania is one of the more exiting wine regions in Italy. The coast is beautiful, but the coast is not very intersting from a wine perspective. It is when the riders leave the coast, and approach the mountain finish, we can start to look for wines.

Italy is a geologically active area, with many volcanos and frequent earthquakes. Africa is putting pressure on Europe in many ways. And again it is Italy that gets the most. The African continental plate is colliding with Europe, and there is a lot of tension in the collision zone. That is why the Alps are rising at the north of Italy. There has been many earthquakes in the area we are going into. But we must hope that it will the riders, not the geology that will create the action. 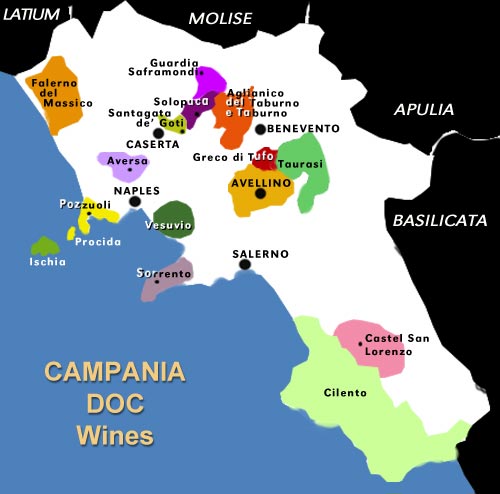 When the riders turn away from the coast and approch the hills before the finish, we come to some of the more interesting wine areas. The stage ends a little to the East of Avellino. We start with an interesting wine form here, the Fiano di Avellino DOCG. This is an example of the traditional Italian wine naming practice: Grape + area, Fiano from Avellino. Fiano is a grape that has been cultivated in this area for a long time, as long as 2000 years. It is a grape high in sugar. The name Fiano is said to derive from the bees that could not resist its sweetieness.

Fiano is used to make a semi dry, sparkling wine that is popular locally, but that has not got much recognition outside the area. But we are more interested in the dry, white wine with immense purity of fruit, elegance and refinement. It must be made from at least 85% Fiano, and can be supplemented with 15% of other, specified grapes.

Fiano is cultivated many places in Campania. But it is at its best in Avellino. It is usually at its peak when stored for three t five years.

If we turn a little to north-east, behind the hill, we find another popular white wine: Greco di Tufo. It is a good white wine.

A little further to the east, we find the red Taurasi DOCG, another wine with a long history. It is said to have been produced since 800 BC. The vineyards are at high altitudes, from 400 m and higher. It is a tanninic wine, that can be and should be stored for some time. Despite its long history, it is a modern wine. The wine producer Antonio Mastroberardino produced a legendary 1968 vintage that chaught international attention to Taurasi.

Taurasi can be made by 100% Aglianico, and the majority of the producer do that. But they are allowed to use up to 15% of other grapes. Taurasi is the crown jewel of South Italian wine. It is often called the Barolo of the south. It can and should be stored for some years.

People often think that for a good, red Italian wine, we have to stay in Piemonte, Veneto or Tuscany, and that the south give cheaper wines. But give Taurasi a try.